You are using an outdated browser. Please upgrade your browser to improve your experience.
by Bryan M. Wolfe
September 13, 2011
It’s no great surprise that Apple is focusing a lot of their attention lately on China, what with its vast population. Now we know a little bit more about what the Cupertino, California-based company plans in the country going forward, courtesy All Things Digital. In the last year, Apple has seen its revenues in China jump to $8.8 billion, up six-fold year-to-year. Yet, Apple’s growth is expected to increase significantly more in the next year or two with the arrival of the iPhone 5 sometime in 2011 and the iPad 3 in early 2012. Both of these products are expected to sell successfully in the world's most populous nation. This news follows other Apple moves in China, including the launch of an Wi-Fi + 3G iPad 2, and its push to make the iPhone available through more Chinese carriers. According to Barclays analyst Ben Reitzes,

“We continue to believe that Apple’s brand has significant momentum in mainland China — Asia Pacific accounted for 22 percent of revenue last quarter, growing 247 percent year-over-year. We believe that Apple’s iPad and iPhone are set to see rapid expansion in the region with new product cycles next year — perhaps with new carriers as well. We continue to believe that a new iPhone will ship next month and a new iPad line with a higher resolution display will emerge in C1Q12.”

Reitzes also contends that because there is currently no “number 2 [tablet]” in China or worldwide, Apple’s strength will only improve at least in the short-term. He concludes by saying:

“The tone around non-Apple tablet competitors is much more subdued vs. our visits to the region last spring, which were characterized by over-zealous tablet forecasts. We believe that Apple will still dominate the market globally.”

In 2011 alone, Reitzes believes Apple will sell 38.9 million iPads worldwide, an estimate he describes as “conservative.” It will be interesting to see how well China responds to Apple's increased presence in the country. In particular, we're interested in knowing whether Apple will begin releasing new products in the nation at the same time they do in the U.S. As it stands own, China typically has to wait weeks, if not months, before new iDevices hit their market. Stay tuned. 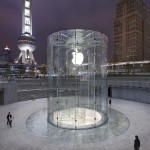 Apple Betting Big On China
Nothing found :(
Try something else