You are using an outdated browser. Please upgrade your browser to improve your experience.
by Bryan M. Wolfe
September 26, 2011
Weakening demand could soon force Apple to slash iPad 2 inventories and also drop prices for the top-selling tablet, according to two new reports today. Since it debuted in April 2010, iPad price points have remained the same. However, that could soon change. Several supply-chain vendors have indicated Apple has lowered its fourth-quarter orders by 25 percent. While this move has yet to be confirmed by the Cupertino, California-based company, it would be the first inventory cut since the tablet came onto scene. The shift is being blamed on “weakening demand in Europe due to economic conditions there as well as a strategy by Apple…to operate with reduced inventory,” according to Bloomberg News. Says Wanli Wang, a Taipei-based industry analyst at RBS Asia Ltd:

“It’s back to reality. Now it seems even for Apple, due to the market situation, we need to be conservative.”

Meanwhile, Digitimes suggests this could lead Apple to cut the price of its iPad 2, which would be great news for consumers. Currently, Apple controls 73 percent of the tablet market. Nevertheless, Amazon is expected to announce its own tablet product later this week, which could prove interesting. This Android-based device will be priced a lot lower than the entry-level iPad, currently available for $499. If Apple does lower the price of the iPad 2, we’ll be one of the first to let you know. Stay tuned. 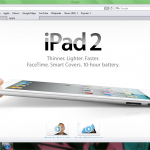 The First iPad Price Drop Could Be Coming

The First iPad Price Drop Could Be Coming
Nothing found :(
Try something else