You are using an outdated browser. Please upgrade your browser to improve your experience.
by Bryan M. Wolfe
October 21, 2011
Zite, the popular personalized news magazine for iPad, has just received a significant update. Today it was announced the publication now includes the addition of multiple profiles. Code-named Sybil, the new feature makes it simple for anyone in a family to share Zite with each getting his or her own custom-made news experience. First released earlier this year, Zite has always been unique in that it "learns" what type of news its reader enjoys most. Now, that concept extends to situations where multiple people use the app on the same iPad. For this to work, each user sets up a separate login within the app. Then, like the Zite experience itself, the real fun begins. According to Mike Klaas, CTO, Zite:

“Time and time again, we have come across multiple people within a family who want to have their own Zite, personalized to them, but only have one iPad. So, we developed ‘Sybil,’ a solution for people who want to share their iPad with a significant other, sibling, parent or hidden personality.”

Zite’s most recent update follows another significant revision earlier this month that featured: Now owned by CNN, Zite has been an AppAdvice favorite for a long time. Today's update makes a truly great app even more so. Download it today in the App Store. 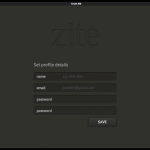