You are using an outdated browser. Please upgrade your browser to improve your experience.
by Joe White
January 1, 2012
Steve Troughton-Smith (@stroughtonsmith) and another iOS hacker known as @themudkip have now managed to port full-resolution iOS applications to a second generation Apple TV. Yesterday, we told you how the pair had managed to port iOS apps to an Apple TV, and included a video of the hack in-action within our article. However, though this was an incredible achievement, an issue with the hack was that iPhone apps appeared as pop-up windows, and were quite small compared with the HDTV screen. Now, after another day of hacking Apple's set-top box, this issue has been corrected: Steve Troughton-Smith and @themudkip have managed to get applications to display at the Apple TV's 720p resolution. This is an important achievement. Before Apple launched the App Store in 2007, jailbreak developers created unofficial iOS apps for the original iPhone. Many believe that this was a key motivation for Apple's development of an iOS application store, as it proved that iPhone owners were willing to jailbreak their handset in order to get apps. For Steve Troughton-Smith, the past has a key bearing on the future of the Apple TV. He noted in a Twitter update:

Remember how the unofficial iPhone apps back in '07 forced Apple's hand in creating an App Store? I'd like AppleTV to get the same treatment — Steve Troughton-Sm… (@stroughtonsmith) December 31, 2011

Though it might be a while before the above hack is released to the public, it certainly would be great for Apple TV owners to have the option of jailbreaking their device, and installing numerous "unofficial" applications on it. And, who knows? It might push Apple towards launching some version of the App Store for the Apple TV. Below, we've embedded a video of the full-resolution Apple TV apps in-action. Take a look at it, and be sure to post your comments below. [via 9to5Mac] 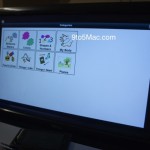 Hackers Now Able To Port Full-Resolution iOS Applications To Apple TV
Nothing found :(
Try something else