You are using an outdated browser. Please upgrade your browser to improve your experience.
by Bryan M. Wolfe
March 1, 2012
The latest iPad 3 rumor doesn’t actually have to do with Apple’s upcoming tablet, but rather its predecessor, the iPad 2. Along with a third-generation iPad, Apple is expected to launch an 8 GB iPad 2 at next week’s iPad event in San Francisco, according to Digitimes. In addition, the same source believes Apple is prepping a smaller iPad to be released in late 2012. Launching specifically to fight off threats from the upcoming Windows 8-based tablets, the new lower capacity iPad 2 would be priced between $349-$399. Last October, Apple took a similar approach when it launched the iPhone 4S. Rather than abandoning the iPhone 4, the company released a $99 8 GB version to sit alongside its newest handset. Currently, the iPad 2 is available in three sizes, each Wi-Fi or Wi-Fi/3G: 16 GB, 32 GB and 64 GB. The iPad 3 is expected to replace each of those models as early as next week. Meanwhile, Digitimes is also reporting that a smaller iPad could be coming later in 2012. This tablet, sized at 7.85 inches, would be priced around $249-$299 and compete directly with Amazon's $199 Kindle Fire and Barnes & Noble's $199 Nook Tablet. While both these rumors sound believable, we want to stress that Digitimes isn't always the best source for Apple news. Rather, it sometimes looks like the Taiwan-based organization throws stuff out there in the hopes that some of their "rumors" actually stick. In addition, we're not sure how a $349-$399 8 GB iPad 2 would be received. After all, we've mentioned previously that slightly-used (and higher capacity) models are already selling for less than $300 at online sites such as Gazelle, NextWorth and Amazon. For more iPad 3 rumors, please take a look at this previous AppAdvice report. As a reminder, Apple will hold its anticipated iPad event at the Yerba Buena Center for the Arts in San Francisco on Wednesday, March 7 at 10 a.m. PST.  Be sure to make AppAdvice your one-stop source on the Web for everything iPad 3 related. Up to and including the March 7 announcement, AppAdvice will have you covered! What do you think, would Apple be wise to release a less expensive iPad 2 alongside the new iPad 3? How about a smaller tablet? 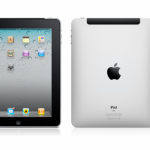 The Latest iPad 3 Rumor Is Actually About Its Predecessor, The iPad 2

The Latest iPad 3 Rumor Is Actually About Its Predecessor, The iPad 2
Nothing found :(
Try something else