You are using an outdated browser. Please upgrade your browser to improve your experience.
by Aldrin Calimlim
April 17, 2012
What a crazy, fantastic place Cannon Cat's world is. Fish have somehow acquired the ability to fly, but, oddly, flightless birds like emus and penguins still can't spread their wings and soar into the air. And so, out of jealousy, a maniacal emu and a flock of penguins capture the flying fish inside floating bubbles. But help is on the way for the poor fish, in the person of Cannon Cat. Cannon Cat is that rare cat who is apparently on a no-fish diet, a feline fellow who would rather be a friend of the fish than a foe. As seen in the trailer below, the spark-suited Cannon Cat launches from one barrel cannon to another, and sometimes to a bouncy blowfish or two, in order to save the bubble-trapped fish. You control Cannon Cat with a single tap and, lest you miss the fish or suffer an unfortunate fall, you have to make sure that your taps are perfectly timed with the cannons' launching angles. Also, you have to make sure that you don't fly into the pesky penguin-copters, that is, unless you have a force shield, which is one of the power-ups you can gain through the in-game store. If you can't see the video embedded above, please click here. A cute, little game with endearing characters and enjoyable gameplay, Cannon Cat is scheduled to launch out of its cannon and into the App Store on April 26. We'll load you up then with further details about the game with a full review here on AppAdvice. 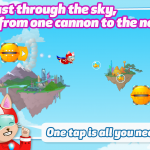 Cannon Cat Launching Soon From Its Barrel Cannon And Into The App Store
Nothing found :(
Try something else