You are using an outdated browser. Please upgrade your browser to improve your experience.
by Brent Dirks
May 1, 2012
Instead of coming up with inane marketing stunts, Samsung was busy doing something else during the first quarter of this year – overtaking Apple and becoming the world's top smartphone vendor. AppleInsider points to estimates released by IDC that say Samsung took the crown during the period with 29.1 percent of the world's smartphone market. Unlike Apple, Samsung doesn't release sales numbers. But the market research firm estimates that Samsung shipped 42.2 million smartphones during the first three months of the year. Apple shipped iPhones 35.1 million iPhones during the quarter. Stalling Nokia and Research in Motion trailed Apple with 8.2 and 6.7 percent of the market, respectively, during the period. While Apple had a near-record quarter with the iPhone, Samsung's large surge was credited from the popularity of its Galaxy S II Android phone. And as a follow-up, Samsung is apparently planning on releasing its Galaxy S III sometime this summer. The phone is rumored to be highlighted by a whopping 4.7-inch screen, NFC capability, and a 12-megapixel rear camera. But the forecast for the iPhone 5, expected to be released sometime this fall, is a little more cloudy. Past obvious features like LTE support, rumors have varied widely on what the next-generation iPhone will offer as far as hardware tweaks. While a thinner body would be a nice touch, there is a large amount of disagreement on whether Apple should increase the 3.5-inch screen size. What features do you think the iPhone 5 should have for Apple to retake the crown from Samsung? Does it need to have massive design changes like some recently released concepts? Or does Apple simply need to continue refining its winning hardware and software strategy? (Image via UbiquiTech) 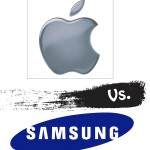 Samsung Steams Past Apple To Become Smartphone Market Leader
Nothing found :(
Try something else