You are using an outdated browser. Please upgrade your browser to improve your experience.
by Aldrin Calimlim
May 1, 2012
In one of my favorite episodes of "The Simpsons," Homer and gang set out to write the ultimate young adult novel. Upon reaching the home stretch of their activity, he remarks, "I just hope we remembered to put in enough steampunk … whatever that is." Whatever steampunk is, it sure has found its way to almost every medium there is. Case in point is "Steampunk Holmes," a series of mashup stories that, although not necessarily geared towards the young adult demographic, has more than enough steampunk in it. For the benefit of the uninitiated, steampunk is a genre of science fiction that features steam-powered technology, rather than, say, electronic gadgets and gizmos. And Holmes? Who doesn't know Holmes? Holmes is, of course, the great detective created by Sir Arthur Conan Doyle, Sherlock Holmes. Produced by Noble Beast, Steampunk Holmes, in turn, fuses the two cultural ideas to yield a unique, steam-powered story of sleuthing. The first story in the Steampunk Holmes series introduces Sherlock Holmes, his bionic biographer Doctor Watson, and his sister Mycroft Holmes in a steampunk setting that pays homage to science fiction pioneer Jules Verne. Titled "Steampunk Holmes: Legacy of the Nautilus," it is now available as an e-book, but Noble Beast founder Richard Monson-Haefel is looking forward to "telling this story in a fashion that has never been done before." Monson-Haefel intends to adapt the e-book into an illustrated print edition, an interactive Web app, and, most promisingly, an even more interactive iPad book app. If you can't see the video embedded above, please click here. To this end, he has turned to popular crowd-funding site Kickstarter. The Kickstarter campaign for Steampunk Holmes has been underway for quite some time and is set to end on Thursday, May 3, at 3:42 PM EDT. But the $29,000 goal of the campaign hasn't been reached yet, and you can still contribute pledges to help the project gather some steam and come to fruition. It's said that every generation deserves its own Sherlock Holmes. We're quite lucky to already have two: Robert Downey Jr. in Guy Ritchie's feature films and Benedict Cumberbatch in BBC's "Sherlock." Soon, we'll get to add another in the cross-media form of Steampunk Holmes. 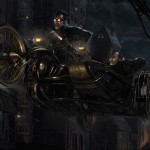 The Game's Afoot For The Interactive iPad Version Of 'Steampunk Holmes'

The Game's Afoot For The Interactive iPad Version Of 'Steampunk Holmes'
Nothing found :(
Try something else