You are using an outdated browser. Please upgrade your browser to improve your experience.
by Brent Dirks
July 27, 2012
With Apple’s patent suit against frenemy Samsung set to begin in the United States on Monday in California, a treasure trove of information is being released and unsealed. One of the more interesting tidbits was found by AllThingsD and relates to documents Samsung had been keeping under seal. The documents examined the similarities between Samsung’s products and Apple’s.

Examples outlined in the documents include comments from Samsung workers discussing similarities with Apple's products, and reports Samsung got from retailer Best Buy that Samsung tablets were being returned because customers thought they were getting iPads. Samsung still has a pending motion to prevent all of this information from being included at trial.

I can only wonder why Samsung wouldn’t want that information to be included in the trial. In the same batch of documents, Apple admits that its profit margin on the iPhone is twice as large as the iPad, underscoring how important the handset is for the company’s long-term future growth. Earlier this week, it was revealed that Apple is looking for a whopping $2.5 billion from Samsung for patent infringement. And parts of that number could easily triple as Apple believes the infringement was willful. If you’re interested in reading more about the fight before the start of the trial, take a look at all of our coverage. And we’ll keep you up to date next week with any new information that comes from the legal proceedings. Source: AllThingsD Via: iDownloadBlog 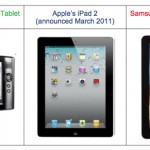 Documents Show Samsung Tablet Buyers Thought They Were Getting iPads

Documents Show Samsung Tablet Buyers Thought They Were Getting iPads
Nothing found :(
Try something else