You are using an outdated browser. Please upgrade your browser to improve your experience.
by Brent Dirks
August 20, 2012
A surprising report from Arxan Technologies says that 92 percent of the Top 100 paid apps on the iOS platform have been hacked. The research was complied by looking for hacked version of the apps that were available from third-party sites outside of the App Store. And hacking isn’t confined to paid apps either. More than 40 percent of popular, free iOS apps were also hacked. The company defined hacked as an app with disabled security, unlocked or modified features, an ad-removed version, a malware-infested version, free pirated copies, and an app that stole source code or intellectual property. And the company has compiled an interesting infographic with its findings. Click on the image to see the full-size version.

The seemingly only good news in the report is that iOS apps fair a little better than their Android counterparts. In the Google Play market, 100 percent of the Top 100 paid apps have been hacked along with 80 percent of the same free apps. Cracked apps have plagued the App Store since its inception. All it usually takes is a jailbroken phone and knowledge of where to look, and users can find a place to download any paid app for free, depriving hard working developers in the process. While Apple has been aggressively trying to take down sites that host cracked apps, it looks like the issue is still a significant one. If you’re interested, you can read the complete report here. 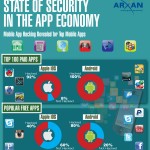 Report Says Astounding Amount Of iOS Apps Have Been Hacked
Nothing found :(
Try something else