You are using an outdated browser. Please upgrade your browser to improve your experience.
by Brent Dirks
November 8, 2012
The annual Made for iPod/iPhone/iPad (MFi) seminar has begun in Shenzhen, China, according to TUAW. And this get together of accessory manufacturers and Apple representatives is the first since the introduction of the Lightning connector used by new iOS devices. While not just anyone is allowed in the meetings, TUAW has learned one big piece of information – Apple is planning on making MFi manufacturers comply with its own supplier code of conduct:

The supplier code, which has been implemented and expanded over the past few years as Apple and manufacturing partner Foxconn have come under increasing scrutiny for working conditions, currently applies only to Apple's manufacturing supply chain partners and component vendors. Pushing it out to the larger accessory ecosystem would be a concrete example of Apple using its 800-pound-gorilla status in the consumer electronics space to influence more companies to behave ethically on worker rights, environmental issues and more.

That’s a pretty substantial change that could easily cause some manufacturers to exit the program. TUAW wasn’t yet aware of other details like what the penalties for non-compliance are. We reported last month about other changes that Apple is making to the program. Third-party manufacturers must have their facilities inspected and approved by Apple before creating any accessories. Apple is also planning on controlling the supply of the Lightning adapters. Despite the news, Belkin did announce earlier this week that it will be the first company other than Apple to sell Lightning accessories. A dock and car charger will be on sale next week. Source: TUAW 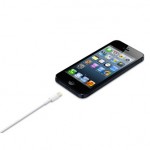 Apple Is Planning To Make MFi Manufacturers Comply With Supplier Code Of Conduct
Nothing found :(
Try something else