You are using an outdated browser. Please upgrade your browser to improve your experience.
by Bryan M. Wolfe
December 3, 2012
The grand experiment is over. Effective Dec. 15, The Daily will cease to exist. Launched on the iPad in early 2010, News Corp.’s magazine hoped to prove that people would pay for original stories in the digital age. In the end, only 100,000 customers paid the $0.99 per week price of admission. In a note to staff, publisher Greg Clayman and editor in chief Jesse Angelo said, in part:

As part of the reorganization, News Corp will look to take the best of what we have done at The Daily and the lessons we have learned, and apply it to our other publishing properties. Some of our assets, technology and personnel, will be absorbed into the New York Post and all full-time staff will have the opportunity to take advantage of various benefits to assist with the transition away from The Daily, including three additional months of pay. Our iPad app will cease publishing on Dec. 15 with a farewell issue.  The Daily has a strong social media presence and a large, engaged community of fans and we intend to continue to engage our social following with our unique take on the news.

The Daily’s end doesn’t come as much of a surprise. In July, it was reported that News Corp. would probably end the publication after the 2012 presidential election, assuming that subscriptions didn’t pick up. At the time, I suggested that The Daily’s biggest weakness was always the competition, which offers timely news on the iPad for nothing. These competitors include: the Zite Personalized Magazine, Flipboard, Pulse News, among others. I also said:

People also no longer seem to have, or want to spend, the time scanning through boring news articles only to find the one or two they actually find interesting to read. As such, readers today want a publication that is flexible enough to offer only the content from topics they want to see. Finally, these customers want that content to change on a constant basis and not just once per day.

The Daily has already been pulled from the App Store. Current subscribers will continue to receive new content through Dec. 15. 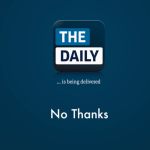 The Daily Publishes Its Last Edition Dec. 15
Nothing found :(
Try something else