You are using an outdated browser. Please upgrade your browser to improve your experience.
by Tyler Tschida
July 14, 2010

It's that time again iPhone and iPad app developers.  Apple has just posted iOS 4.1 beta at its iPhone Developer Center website along with the software development kit.  The new beta includes firmware for the iPhone 3G and later, and the iPod touch 2G and later. Like most of you, what we really want to know is if this version includes the signal bar tweak that Apple promised would allow the iPhone 4 to accurately measure and display reception, which is what they attribute to the now widely known "death grip" issue. According to quite a few users who have submitted screenshots, it appears that at the very least, Apple has changed the way the bars are displayed.  As you can see in the image above, the smallest two bars have been extended quite a bit.  Whether the algorithm for measuring reception has been changed remains to be seen. If you are a developer who has installed and already tested iOS 4.1 beta, feel free to let us know if you are seeing more or less bars after the update.  Also, stay tuned as we discover more changes in iOS 4.1. Update: We are receiving reports from readers that Game Center is included in iOS 4.1 beta. [Images via iPod1; Thanks to Jan Fredrik from Norway for the tip!] 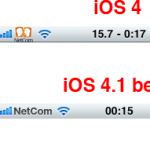 iOS 4.1 Beta Now Available For Developers, But Does It Have The Signal Bar Tweak?

iOS 4.1 Beta Now Available For Developers, But Does It Have The Signal Bar Tweak?
Nothing found :(
Try something else