You are using an outdated browser. Please upgrade your browser to improve your experience.
by Felix Xiao
October 21, 2010

Reckless Racing is a drifting top-down dirt racer experience that puts your skills to the test in detailed and realistic environments. This competitive game will capture your attention and time with its hilarious characters and innovative controls. Forget the boring regulations of real life driving and do whatever it takes to cross that finish line before the other racers. 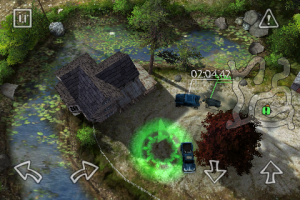 The game has 3 different game modes that are full of fast-paced action and gripping turns. In Dirt Rally mode, your goal is to finish a number of laps before any of the 5 other AI opponents. Hot Lap mode is a time trial in which you can try to complete a single lap as quickly as possible while racing against the ghost of your previous best time. Deliver mode lets you collect packages and transport them to spots on a map before time runs out. Reckless Racing also features Dirt Rally and Hot Lap modes in online multiplayer against 3 other racers from across the world. Before playing a level, you'll get to choose which character and car you want to use out of the 6 available. While they differ in size and shape, the vehicles seem to have similar stats and don't change how fast you can drive. Each level also has 3 difficulty levels: bronze, silver, and gold, in which the skills of other drivers change. There are 5 extremely detailed tracks, with a reversed version for each that can be unlocked after earning a medal. The game has 5 control methods that can be customized even more to reflect every racer's preferences.

Reckless Racing is the perfect top-down racing game for a wide audience due to its various difficulty levels and control options. Playing a level on bronze is relatively easy and manageable even for a newbie, whereas playing on gold is challenging for veterans. The inclusion of 5 types of controls, including tilt, half wheel, full wheel, standard, and auto-gas, guarantees that you'll find one that you like and are comfortable with using. There is an amazing interactive tutorial at the start of the game that lets you try out the different controls while moving at a casual speed around a simple track. 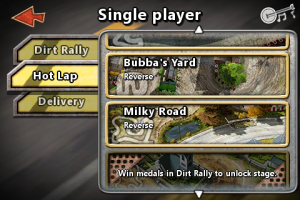 While many racing games are based entirely on how fast you can drive by holding down a gas button, Reckless Racing has much more depth. Delivery mode is unique and requires you to plan out a route from the location of the package to the desired location before you floor it. Hot Lap is enjoyable as well and will have you trying again and again to beat your ghost data. When racing, drifting is critical and is the only way to avoid falling into rushing streams and endless canyons. Just in case you do get stuck, a very useful respawn button in the corner of the screen will put you back on track. The graphical content of each of the game's 5 tracks is stunning, with many objects that can be interacted with. For example, cones and street signs can be knocked over, and you can take shortcuts by cutting through shallow water and other places not shown on the mini-map in the left hand corner. The cars are designed to all look polished, although some are obviously cooler than others. 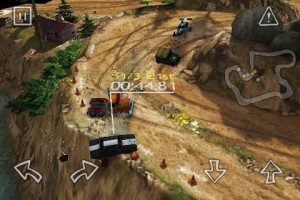 With online multiplayer and score submission after every single player level, a massive thunderstorm of competition develops and quickly turns into a battle to rank higher on the leaderboards. Online play is generally smooth and games are hosted on the Reckless Racing servers, so you shouldn't have to worry about connection errors if you have decent wifi. The entire game is fantastic in all aspects, and regardless of whether you decide to race your ghost offline or real players online, it'll be a whole lot of fun.

The first negative thought that comes to mind after playing Reckless Racing is that it only has 5 tracks. Even with a reverse mode for each track, the game leaves you wanting more high-quality environments to slip and slide on. It would be excellent to see some additional maps in a future update. When driving, your time and position are constantly shown above the car. While it's useful to have the information available, the font used looks really choppy and falls short when compared to the graphics of the rest of the game. There's also an annoying voice that laughs at you every time your vehicle is wrecked, although it can be turned off.

Game modes, difficulty levels, and online multiplayer all contribute substantially to the replay value of this thrilling game. If you've enjoyed other top-down racers on the iPhone, then this one should be a real joyride. Reckless Racing is easily one of EA's best games to date and is a must buy for $2.99. 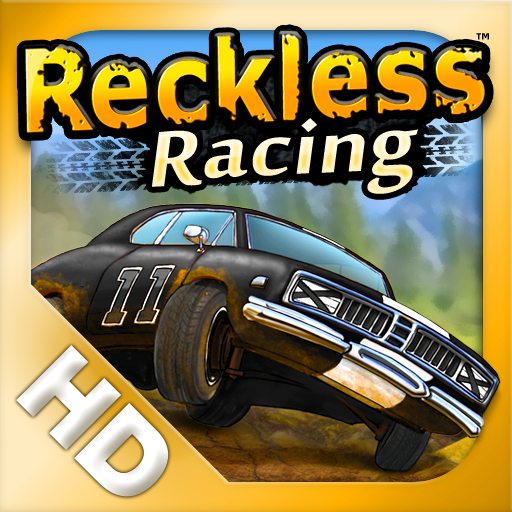 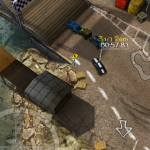 Review: Reckless Racing - Lose The Rules, Win The Race
Nothing found :(
Try something else