You are using an outdated browser. Please upgrade your browser to improve your experience.
by Alexander Vaughn
December 5, 2010
In case you haven't noticed, the iPad is getting a lot of hype of this holiday season. While it has always been prestigious to associate your brand with Apple in any way possible (case in point: the fact that companies are dropping big bucks on iAds), this is going one step further. After being used as a doorbuster by TJ Maxx recently, it's now Bloomingdale's turn to attempt to get some customers and publicity using Apple's tablet, as noted by Fortune. In a full-page ad (screenshot) in today's New York Times, the retailer is promoting a special deal in which each customer who leaves their flagship Manhattan store with $1500+ in purchases (next weekend), will be offered an iPad. If you consider their t-shirts go for just under $200 bucks, it won't even be that much of a challenge to reach that total. Of course, we're falling for their tactics by mentioning this. Nevertheless, it's worth noting how much trust companies are putting in the iPad, just a few months after its release, confident of the traction it will get them. I wouldn't be surprised if there was some heavy market research behind such deals that have made sure these offers will have an impact. Will this phenomenon spread? We hope so. Getting iPads into people's hands is good, as these are great devices. Hopefully, this won't come at the cost of your entire family only getting a sweater this Christmas. 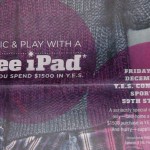 The iPad Doorbuster: Shop At Bloomingdales - Get A Free iPad

The iPad Doorbuster: Shop At Bloomingdales - Get A Free iPad
Nothing found :(
Try something else