You are using an outdated browser. Please upgrade your browser to improve your experience.
by Bryan M. Wolfe
June 22, 2011
Two months ago, we began hearing rumors Amazon planned to unveil its very own “iPad Killer.” Today, that rumor has grown somewhat and includes a timeframe for delivery. According to Taiwan-based DigiTimes, the unnamed device will be ready for shipment ahead of the all-important holiday shopping season. Rumored to launch in August or September, Amazon’s Android-based tablet is expected to sell up to 4 million units before the end of 2011, with monthly shipments targeted at between 700,000-800,000. The new tablet is said to include Amazon’s recently launched Cloud Player service for music and interact with the company’s Appstore for Android. Accordingly:

The timing of launch is to meet the peak sales period prior to Thanksgiving in the US and the year-end holidays in the US and Europe, the sources pointed out. Amazon adopts processors developed by Texas Instruments, with Taiwan-based Wintek to supply touch panels, ILI Technology to supply LCD driver ICs and Quanta Computer responsible for assembly, the sources indicated.

These are large numbers and suggest Amazon plans to aggressively compete against Apple for market position in the still-infant tablet market. Given the size and reach of Amazon, they might be the one company that could actually compete against Apple and its iPad. In May, our own A.T. Faust opined Amazon was “Android’s Only Hope For Relevance, Apple’s Only Competition,” and perhaps he is correct. We’ll keep you updated on Amazon’s possible tablet launch and how it could affect the iPad. Meanwhile, what are your thoughts on this? Would you be interested in purchasing a tablet from Amazon? Let us know by using the comments below. [Photo: A.T. Faust] 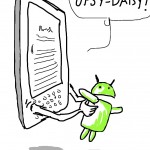 Is Amazon's "iPad Killer" Almost Ready?
Nothing found :(
Try something else