You are using an outdated browser. Please upgrade your browser to improve your experience.
by Dave LeClair
April 1, 2012
Developers are accustomed to receiving a 70 percent share of the revenue for the sales of their applications in the App Store. It always surprised me that they only receive 60 percent on clicks with Apple's iAd program. However, developers have been notified that clicks on the ads in their applications will give them 70 percent of the money immediately. This seems like a reasonable split, seeing as the developers are the ones doing the work to put the application together and get it on the App Store. This deal is part of Apple's plan to get more developers and advertisers on board with the iAd program. Apple recently lowered the buy-in for advertisers to $100,000. This was obviously done in hopes of getting more advertisers to work with the program, which will in turn get more developers involved. Realistically, the best way to recruit additional developers is to pay them more, and a 10 percent increase is a great way to get them interested. With the influx of free, ad supported applications, more developers will be looking for ways to generate revenue from their free apps. Apple hopes this increase will keep developers from using other third party services in favor of using Apple's option. The late Steve Jobs said Apple was getting into the advertising business to "help developers make more money." A move like this lives up to that philosophy by putting more of the money into the app creator's pockets, and less into the pockets of Apple. Source: TheNextWeb 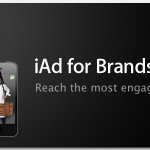 Apple Increases Shared iAds Revenue To Developers
Nothing found :(
Try something else