You are using an outdated browser. Please upgrade your browser to improve your experience.
by Bryan M. Wolfe
June 25, 2012
When Apple’s new Maps app arrives with iOS 6, it will include Yelp integration, according to a new report by Bloomberg. According to the report, Apple’s latest developer kit for iOS 6 includes screenshots of the Maps app featuring Yelp check-ins. Yelp, which arrived on the scene in 2004, makes it easy for users to find and review local establishments. A separate Yelp app is available in the App Store. Earlier this month, Apple announced that Maps would, for the first time, not include Google’s mapping software. Instead, the Cupertino, California company developed their own Maps technology for iOS 6. Yelp’s integration into Maps was not announced nor was it demoed at WWDC. Is Apple wise to integrate Yelp into the Maps app? 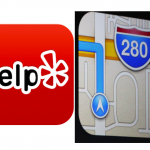 Yelp Integration Headed To Apple's New Maps App
Nothing found :(
Try something else