You are using an outdated browser. Please upgrade your browser to improve your experience.
by Joe White
September 1, 2010
Apple's special event is now over. For many, the fun is just beginning. Apple's online store is live and kicking with new iPods ready to be purchased, and new ads available to be viewed! Among Apple's new line of iPods is the fourth generation iPod touch, which comes complete with a FaceTime camera, and Retina display! As many iPhone 4 owners know, the Retina display is quite outstanding. And, the iPod's ability to be used for FaceTime calls (with iPod touch and iPhone users) is a great move many will undoubtedly appreciate. The new iPod touch line begins at $229 for an 8GB device. For $299, customers can get 32GB, and for the higher price of $399, you can get a 64GB iPod. All ship within a week for free, and come preloaded with iOS 4.1. Potential customers can also check out Apple's new lineup of iPod touch TV ads, which are available to view online at Apple's site. Additionally, Apple's small and cool iPod Nano and Shuffle are also available to purchase. The Nano starts at $149 for 8GB, and $179 for 16GB. The Shuffle is even more of a bargain at $49 (for the 2GB model). So, if you're planning on purchasing one of Apple's new devices, be sure to head over to Apple's online store and check them out now! 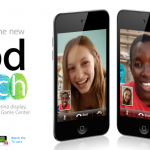 Apple Store Goes Online: Get Your New iPod Now!
Nothing found :(
Try something else