You are using an outdated browser. Please upgrade your browser to improve your experience.
by Joe White
June 22, 2011
Hot on the heels of Amazon, Google and Apple, Best Buy has just unveiled its own cloud-based music service, called "Best Buy Music Cloud" (which is powered by Play Anywhere). Here's what you need to know: The service allows users to upload their own songs to "the cloud," and stream them to another computer or iOS device. A desktop app allow users to easily upload specific playlists, however users can only upload iTunes music to Music Cloud, and not tracks stored in folders on your hard drive. Best Buy will release a series of smart phone apps (iOS included), which will allow users to stream music to their handset, and edit users' music collection on-the-go. Tracks can also be downloaded to smart phones, for offline listening (a feature currently present in the Spotify app). Best Buy Music Cloud is available in two versions - a free "Lite" version, and a paid "Premium" version (which will cost $4/month), though this premium version isn't available on Apple devices. Furthermore, we do not yet know what kind of allowance each version offers. In the iOS apps, 9to5Mac notes that 30 second song previews may only be available unless users pay extra, which is disappointing. However, there are no limitations regarding the desktop, Web based version of Music Cloud. Here's a screenshot of the Web interface: For more information on the service, head over to Music Cloud's official website: http://www.bestbuymusiccloud.com/. And if you like Best Buy's offering, be sure to let us know in the comments. 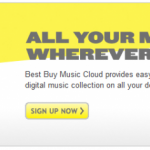 Best Buy Jumps On The Bandwagon, Unveils Its Own Cloud Music Service

Best Buy Jumps On The Bandwagon, Unveils Its Own Cloud Music Service
Nothing found :(
Try something else