You are using an outdated browser. Please upgrade your browser to improve your experience.
by Bryan M. Wolfe
September 13, 2011
One of the most downloaded news-generating apps for the iPad recently reached a significant milestone. Flipboard has now been downloaded 3.5 million times, according to TechCrunch. First released in July 2010, Flipboard makes finding news from sources easy using its unique “flip page” approach. In recent months, the free app has added premium content from big names such as Oprah Winfrey and The Economist. Then in July, it launched a brand advertising service, which provides unique content not available anywhere else. According to Flipboard CEO Mike McCue, the app has gone from 250 million flips per month to 550 million in the four months since June. He states:

“The tablet is creating a totally new kind of consumption experience, the kind of experience people have dreamed about for years.”

The 3.5 million downloads figure looks even larger when you compare it to the iPad population as a whole. In the 18 months that the iPad and iPad 2 have been available, Apple has sold approximately 35 million units. This means that 10 percent of iPad users have downloaded the app. And with Flipboard expected to launch its own video service to take on Netflix in the coming months, we expect the company's user-base to only increase. Amazing stuff, don’t you think? 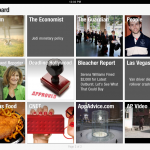 Flipboard For iPad Reaches Impressive Milestone
Nothing found :(
Try something else