You are using an outdated browser. Please upgrade your browser to improve your experience.
by Bryan M. Wolfe
August 26, 2011
Look out Netflix, a new competitor could soon emerge. According to Reuters, Flipboard, the newsreader app, is likely to begin offering video content in the next few months too. But, that's not all. In a move that will put it squarely against Hulu, Facebook, and the already mentioned Netflix, the Palo, Alto, California-based company is looking to cut deals with studios that carry movies and episodes of TV shows. If that weren’t enough, Flipboard is also looking to cut deals with publishers to sell electronic books via its iPad app as well.

As part of that process, Flipboard for the iPhone/iPod touch is expected to launch in the coming months as well. First launched on iPad in 2010, Flipboard was named by Apple as its iPad App of the Year. It offers articles from a growing list of brands including Oprah.com, Facebook, and more. According to Reuters, the free app has been downloaded three million times. 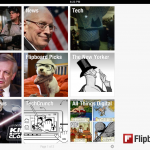 Flipboard Preparing To Take On Netflix And Amazon

Flipboard Preparing To Take On Netflix And Amazon
Nothing found :(
Try something else