You are using an outdated browser. Please upgrade your browser to improve your experience.
by A.T. Faust III
August 9, 2012
While the struggle for supremacy between iOS and Android is typically fierce on all fronts, one of the biggest battles is bound to be fought over the future of 3-D interactive map technology. Just days before Apple's WWDC Maps app announcement, Google stole some thunder with its own update preview, bringing sophisticated 3-D mapping into the Google Earth fold. Still, the search giant's methods -- and results -- are a bit different from Apple's beta product, and the jury's still out on which brand is wielding the most cartographic expertise. Fortunately, Jeff Benjamin of iDownloadBlog has some insight on the subject, and he's put together a massive missive to underscore the surprising answer: So far, Apple's winning the Map Wars. Here's Jeff's video comparison explaining why: Statistically, Apple is leading Google in the support category, featuring full 3-D maps of 26 cities on three continents to Google's 13 on two. Further, Apple's images are of markedly higher resolution, and the company's textures are finer and more realistically applied (e.g. no skewing -- see the battleship shot in the header). However, due to Apple's use of these higher-quality images, panning and zooming -- at least in Maps' current beta form -- is a bit choppier than getting around on Google Earth. However, it's a good bet that once iOS 6 is officially released, any such lag will be mostly sorted out. Check the gallery below for a few comparison shots, and be sure to head over to iDownloadBlog for the full, high-res exhibit. Source: iDownloadBlog [gallery link="file" order="DESC"] 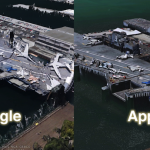 Apple Takes On Google In 3-D Maps Comparison
Nothing found :(
Try something else