You are using an outdated browser. Please upgrade your browser to improve your experience.
by Lory Gil
June 11, 2012
Last week, we told you about Google’s preemptive strike against Apple’s ousting of their mapping service for the native iOS Maps app. We also told you about Apple's acquisition of Placebase, C3 Technologies, and Poly9 as well as the reported mapping service that they were rumored to be working on. At today’s keynote address at the Worldwide Developers Conference (WWDC), Apple just cleared up all the rumors and questions we’ve been asking with the announcement of the new Maps app that will be updated with the release of iOS 6 this fall. The new Maps App has said “Goodbye to Google” and incorporated Apple’s own mapping technology. It features real-time traffic updates, including incident reports. There is a fantastic new navigation system that is a lot like a GPS application. Apple has also added “Quick Route,” which shows multiple routes and suggests the best one based on current traffic conditions. The Maps app also works from the lock screen so you can access it quickly if you aren’t sure if you missed your turn. It is integrated with Yelp and Siri to help you find businesses nearby that you may need while on the road. For example, Siri will help you locate the nearest gas station if you need to make a pit stop. As we predicted, Apple has incorporated a fantastic 3-D imaging system that is vector-based for fast load times. You can zoom in and out with very smoothly. Apple spent months and hundreds of hours, flying around the world to gather images to create a sophisticated 3-D map that it used to build up 3-D models of cities from around the world. Using the Map app’s “Flyover” feature, uses can enter a destination and virtually fly to it. 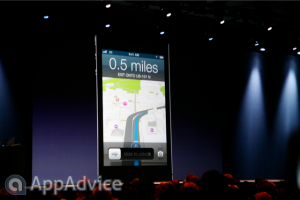 The new turn-by-turn navigation feature that will come with Apple’s new Maps app has a voiceover route tracker that will tell you what your upcoming direction will be. It uses a voice system that sounds remarkably like Garmin’s lady, but there is no information at this time as to whether Apple teamed up with any other software company for the turn-by-turn feature. Apple has been snatching up companies over the past few years. Starting in 2009, the company acquired software development company Placebase, and during the summer of 2011, picked up mapping firm Poly9. In October, we found out that C3 Technologies, which rounded out a strong 3-D mapping department, was added to the fold. This solidified Apple’s intent to create its own proprietary mapping solution. When Google announced the revamped Google Earth, complete with 3-D mapping technology, at its own product announcement event last week, we knew it was the end for the familiar mapping imagery that we’ve grown accustom to over the past few years. However, Apple’s new mapping service looks like it will bring us all the features we are familiar with, while adding new ones that we’ve been longing for all of this time. 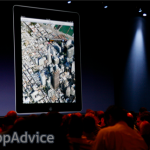 Apple's Native iOS Maps App Gets A 3-D Facelift
Nothing found :(
Try something else