March was yet another great month for App Store gaming. Our eclectic list includes giant plushies, fantasy golf, and hero pigs. See what else made the list. 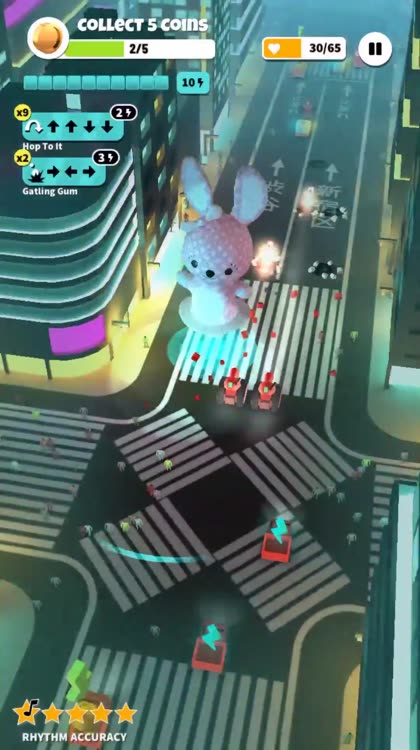 Conquer the Planet One Dance Move at a Time

Bust a move in Giant Dancing Plushies. You’ll help the adorable Kaiju conquer the planet with their best dance moves. You can dance with in-game music or any other music source.

Arcane Golf takes mini golf to a fun fantasy world with dungeons, dangers, gems, and geometry. There are more than 200 levels with four unique courses.

Dive into the world of MLB with R.B.I. Baseball 21. The new version includes the ability to create a player along with play-by-play commentary, time-of-day visuals and other improvements.

You’ll play as a hero pig in Card Hog. He’ll move across the board to defeat foes, dodge traps, collect loot, and more. There are multiple game modes and different board sizes.

In Tiler More, you’ll make words by stacking letters and them merging them together. Stacks are limited to three letters high and tiles can have no more than three letters.

Pavolv’s House is a full creation of the board game. The game touches on the the titular house during the Battle of Stalingrad in World War II.

An Experience for Your Ears

Blind Drive is an audio-based black comedy arcade game. You’re blindfolded and going against traffic and can’t se a thing. Listen closely to make it through.

Akarium sends players into the deep underwater to fight predators and bosses. It features beautiful underwater landscapes and more.

Doctor Who: Lonely Assassins is a found-phone game that continues on the legacy of the Weeping Angles first encountered in the story “Blink.” You’ll search through the phone and work with authentic characters from the iconic series to confront an unspeakable evil.

We Will Rock You

You’ll tap to the rhythm of 20 Queen tracks.