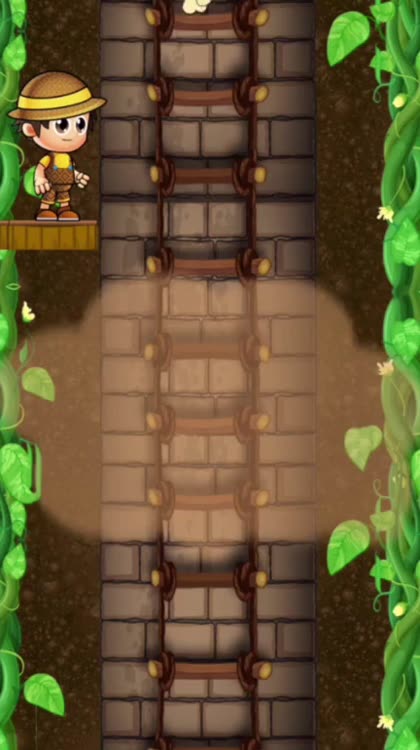 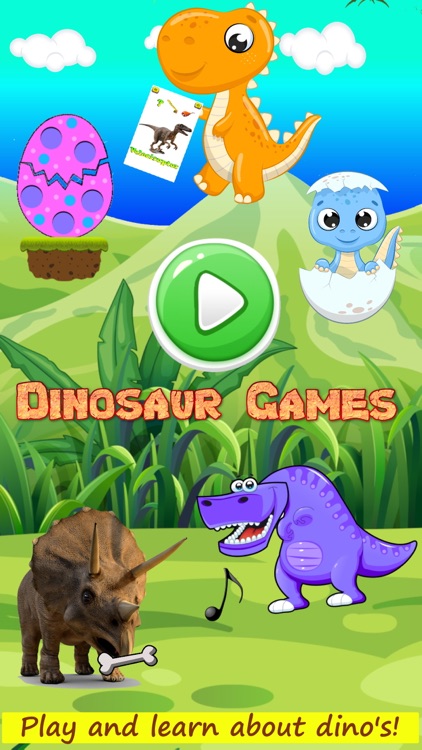 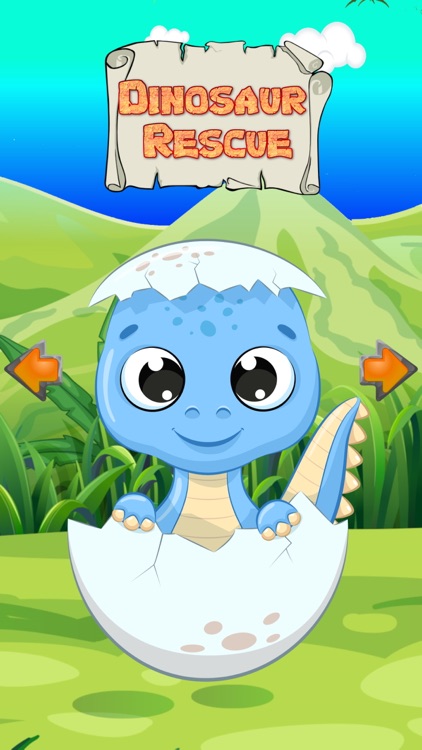 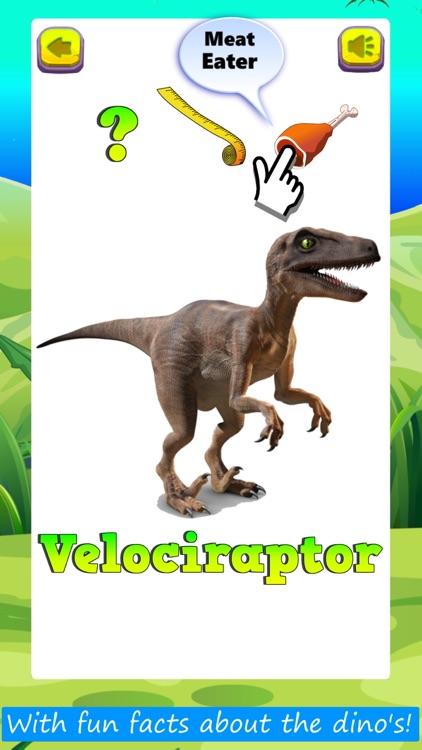 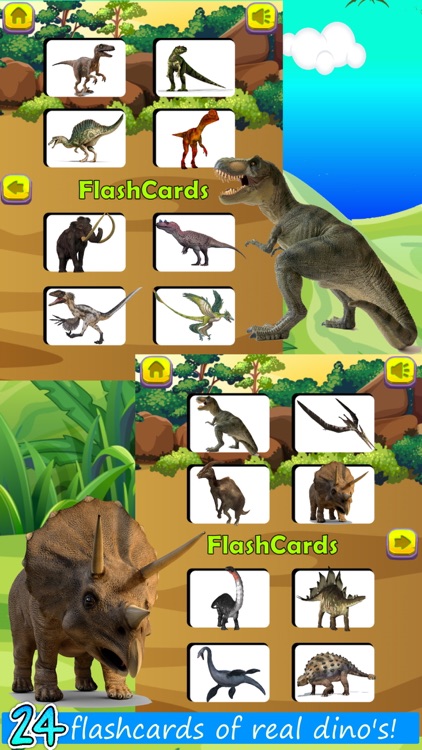 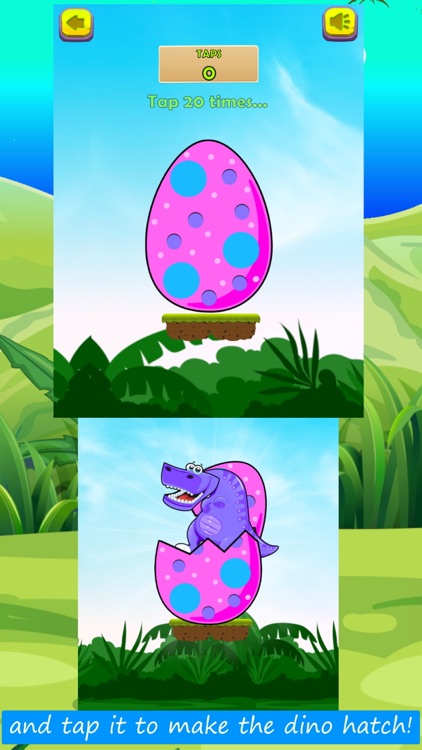 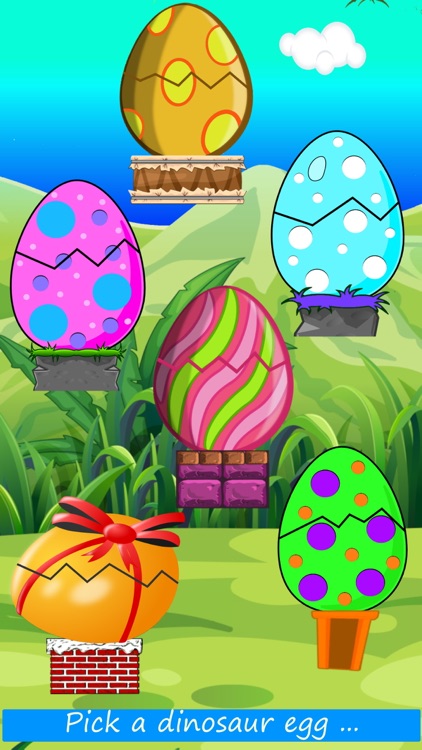 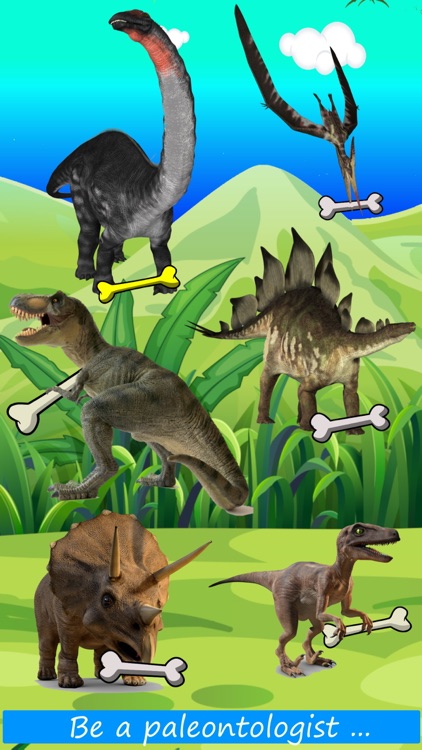 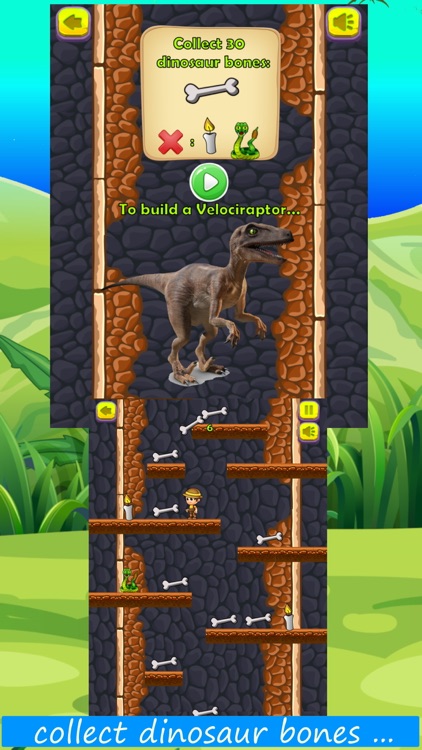 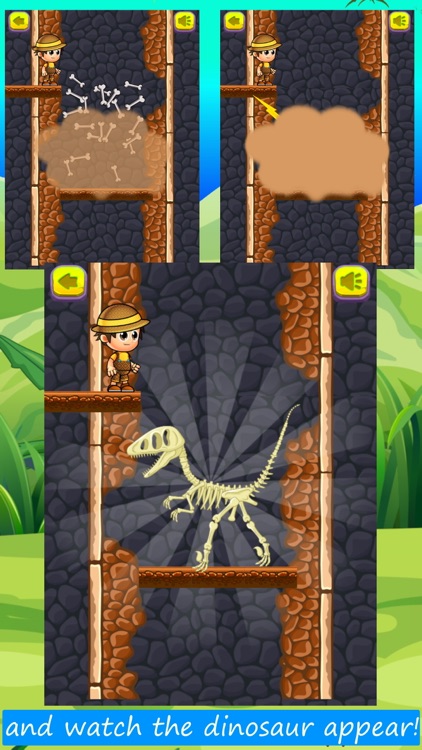 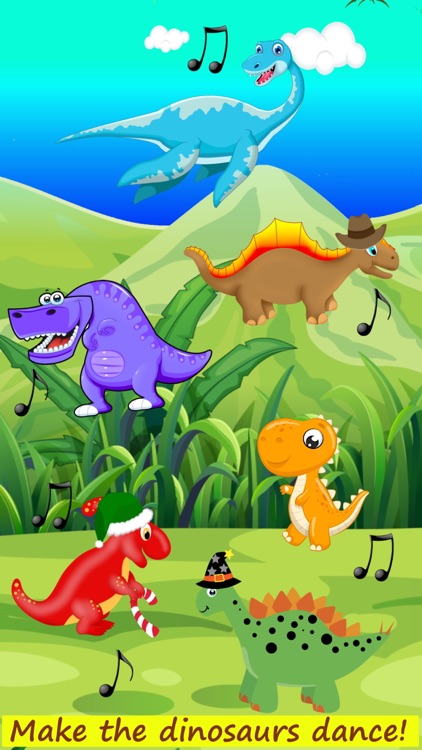 Dinosaurs lived long ago but we still are fascinated by the majestic beasts... if you or your budding paleontologist love dinosaurs and want to learn more about them then dig into Dinosaur Games for Kids Full Version! With flashcards, over 50 dinosaur facts, an egg tapping game, a dino bone collecting game, and new find the Christmas dinosaurs this interactive app will entertain and delight everyone that digs dinosaurs! Designed by teachers in Canada with over 15 years childcare experience using their philosophy of learning through play this app will keep your little ones engaged while they play and learn real facts about the dinosaurs.

Dinosaur Bone Collecting Game
Help the paleontologist collect bones in six different dinosaur worlds! In this fast paced exciting dino game you will jump from platform to platform collecting bones in fun themed worlds like jungle, Halloween and Christmas! And when you collect the right amount the bones will magically come together to form a dinosaur skeleton. And the best part is when you tap the dinosaur skeleton you will hear another fact about the dinosaur you helped to build! It’s an engaging exciting game that is sure to delight all dinosaur fans, along with sharpening their cognitive skills.

Dinosaur Flashcards
Learning the names and seeing a real life picture of over 30 dinosaurs is interesting and will help you say the proper pronunciation of the dinosaur name. And when you tap the dinosaur you will see the what the fossils look like! And along with names our flashcards also provide some interesting and real facts about the dinosaurs that roamed our planet so long ago. Each card has five little icons that will say if they were a meat or plant eater, how big they were, when they lived, where there fossils were found, and another cool fact, something different for each one. With over 120 facts about the dinosaurs the Dinosaur Games flashcards are interactive fun and will give any budding paleontologist a chance to really learn about their favorite things!

BONUS GAME- Dinosaur Fossil Quiz
After you've played with the flashcards test your knowledge and take the fossil quiz! Each new page will show you a fossil and 4 dinosaurs, so you have to decide which dino matches the fossil. It's a neat way to play with dinosaurs!

Dino Egg Tapping Game
It’s a fascinating fact that all dinosaurs were hatched from dino eggs like most reptiles. It’s hard to imagine these huge beasts starting in a little egg, but now your little one can have fun cracking them! In the Dino Egg Tapping Game you can pick an egg and then tap that egg a certain amount of time to make it crack open… and when it does a fun and lively dinosaur animation will surprise and delight! Along with learning number recognition and building cognitive skills this game is sheer fun and enjoyment for all dinosaur lovers!

Dinosaur Dancing
Another interactive fun game is Dino Dancing! Tap the dinosaurs and make them dance to the funky music, because we all know how little fingers like to tap, tap, tap. This entertaining game is another delightful way to have fun with dinosaurs.

Come back to prehistoric times and have a blast playing and learning about dinosaurs with Dinosaur Games for Kids! Where education and entertainment go hand in hand to encourage you and your kids to expand your knowledge about majestic dinosaurs while having a roar of fun. 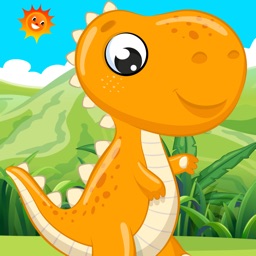 Dinosaur games for all ages 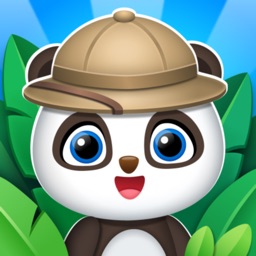 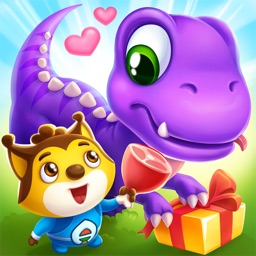 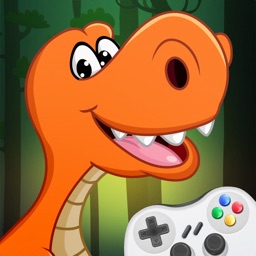 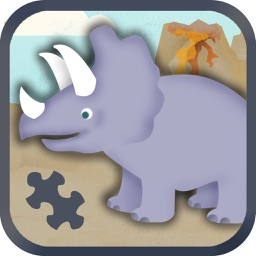 Scott Adelman Apps Inc
Nothing found :(
Try something else