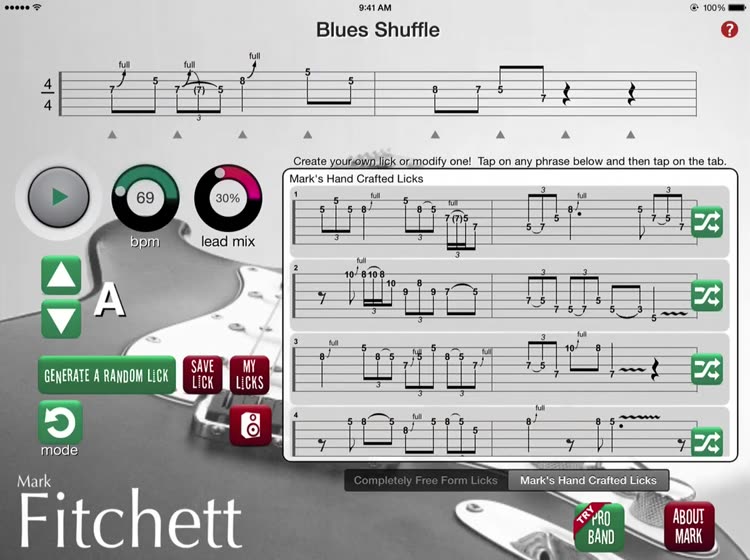 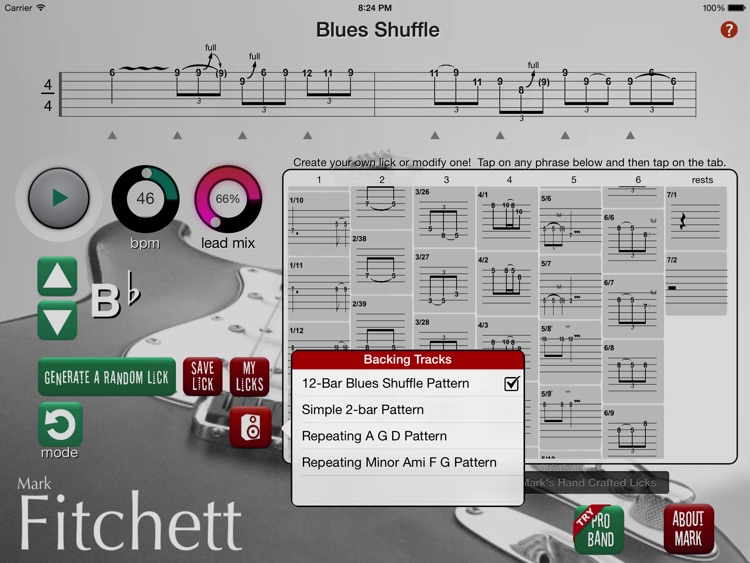 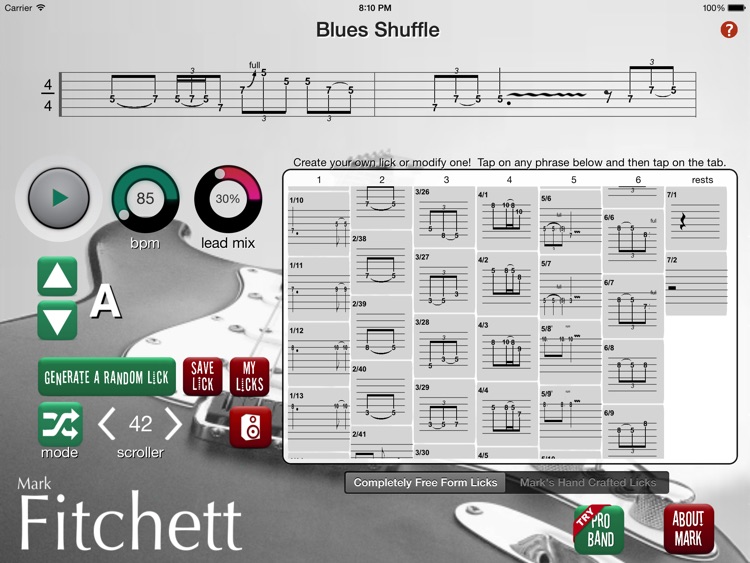 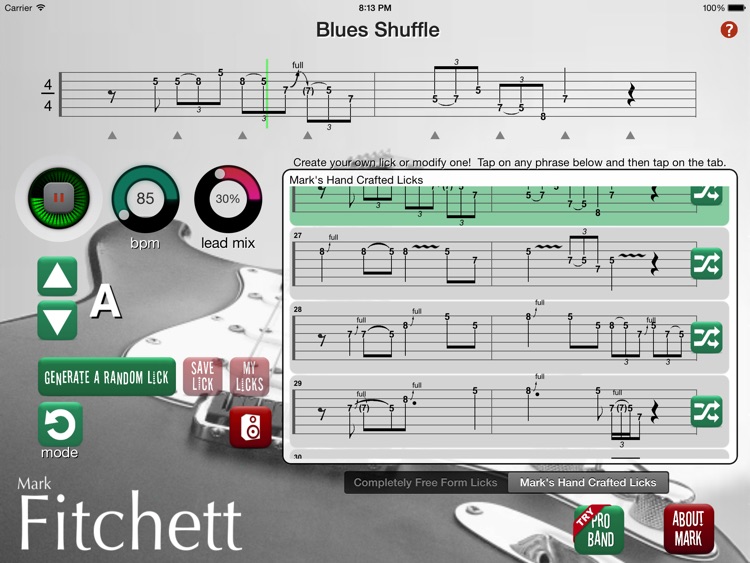 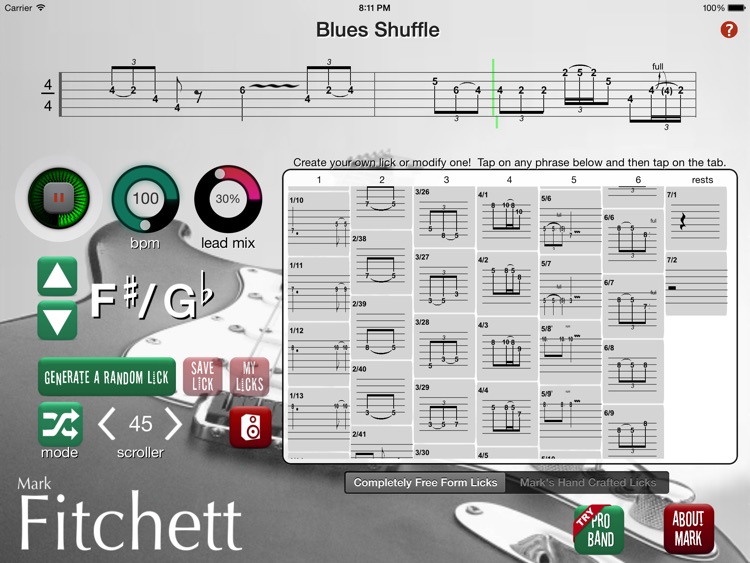 This insane ground-breaking app draws from over 400 hand-crafted phrases to compose long solo runs that demonstrate practical lead guitar technique for blues and rock. These fully-tabbed runs come from thoughtful, musical and finger-efficient construction that are composed uniquely for you on-the-fly across the fretboard.

There are some many possibilities that even we don't know everything it can produce!

Pick a key, tempo and a backing track - then sit back and listen to the solo runs created. You can then easily capture and save the ones you like! Slow them down and learn them in any key!
Everything you save can be called up later to be practiced at slower (or faster) tempos or in different keys. Want to build something from scratch? Easy! Just pick from the list of licks and experiment away. Or pick from Mark's selected runs.

Our exclusive CONSTANT-SCROLLING TAB makes it super easy to read the tab, even if you don't read music (or read well). The spacing of the notes shows exactly the timing! It's never been easier.

Million Licks is based on the knowledge that so many great solos are created from back to back 8-beat (2 measure) phrases, and that the building blocks of these larger phrases are small 1 and 2 beat improvisational ideas. We take some of the best classic guitar lick ideas from the blues and rock shuffle world, teach them to you, and then show you how to spontaneously recombine permutate and modify them in any order to ultimately create your own original phrases and licks. Mark has composed dozens of 8-beat licks that are included with the app beyond the millions possible! And even more, Million Licks is designed and built to be upgraded, so new licks will be available periodically.

What goes into making a great solo?

Million Licks is a radical departure from learning a phrase by rote and then moving on because it actually shows you the finer details of what goes into a well crafted phrase, demonstrates hows these phrases are connected, and teaches you how to create variations within that phrase. Why? Because the really great improvisers know how to take a good idea and construct variations built upon spontaneously recombining their smaller pre-learned bits to create larger ones as well as morphing into new ones. And of course they’re doing all this while executing clear, concise, longer articulate phrases which have a definitive beginning and end.

When soloing are you randomly running notes across the neck, and every once in awhile playing something you think might have sounded pretty cool? It happens! The problem is when you have no idea what you just did, why it worked, and even worse how to duplicate it. If you’re like most guitarists first starting to improvise your solos probably seem to have little or no form and you feel like you’re just rambling.

Open your ears and fingers to the endless possibilities! 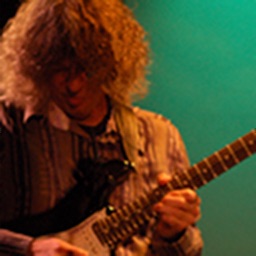 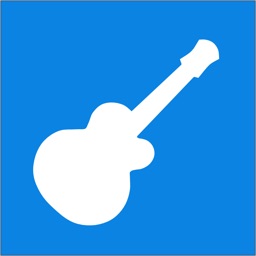 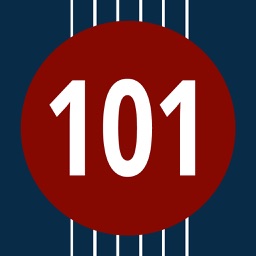 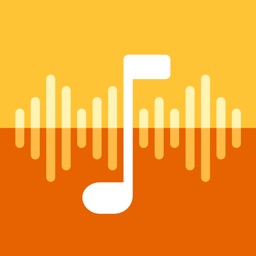 David J Chura
Nothing found :(
Try something else