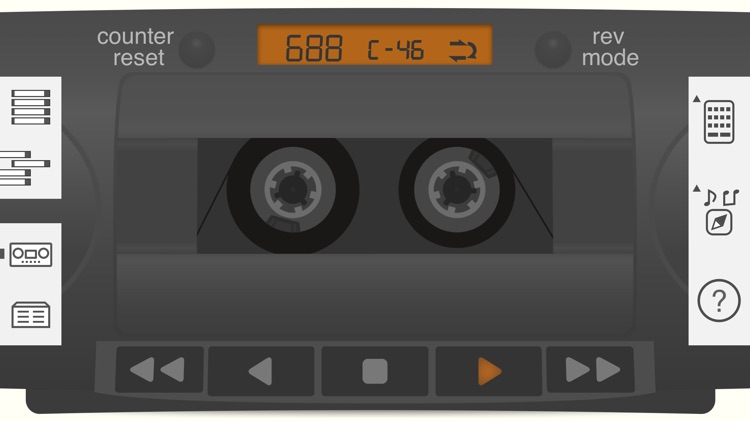 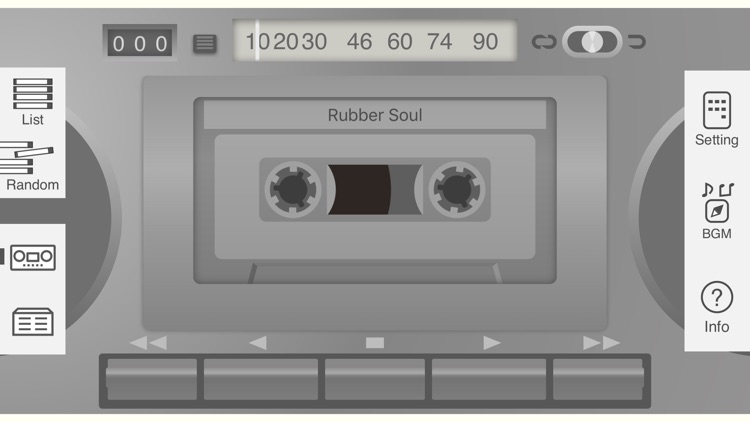 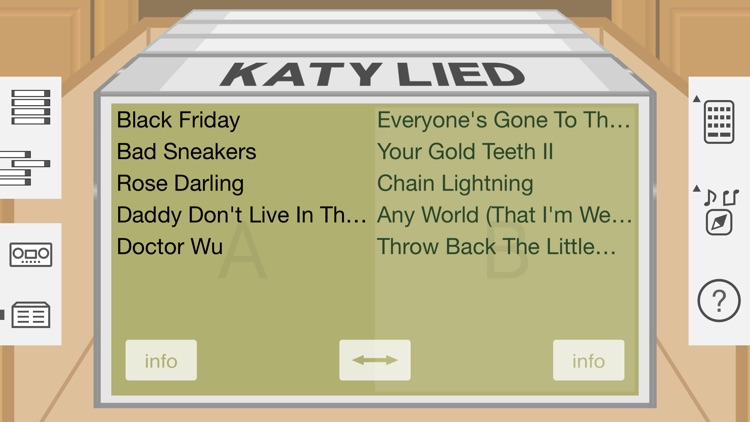 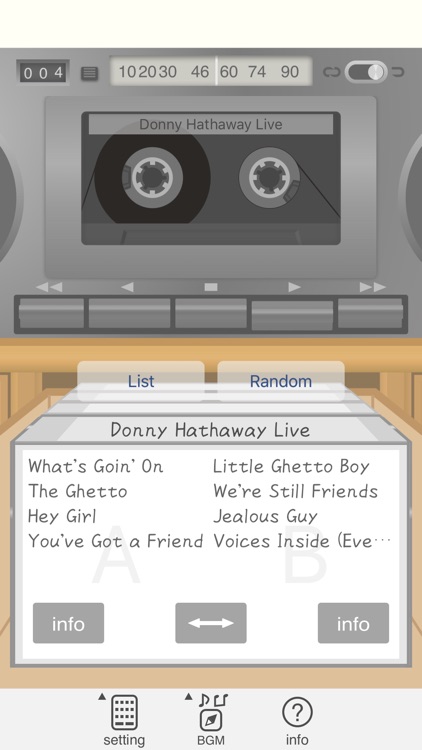 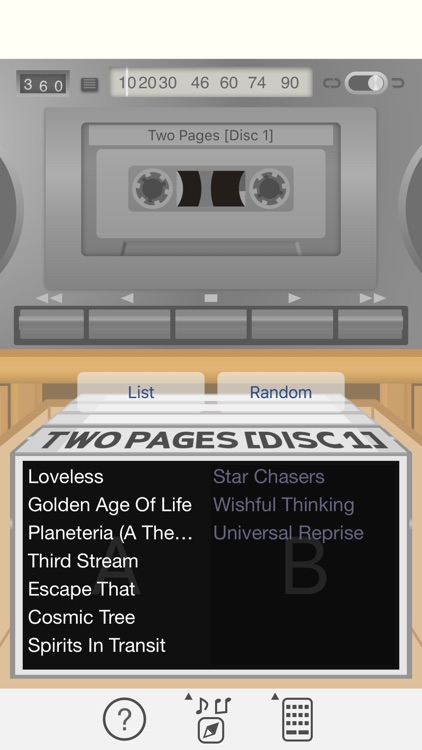 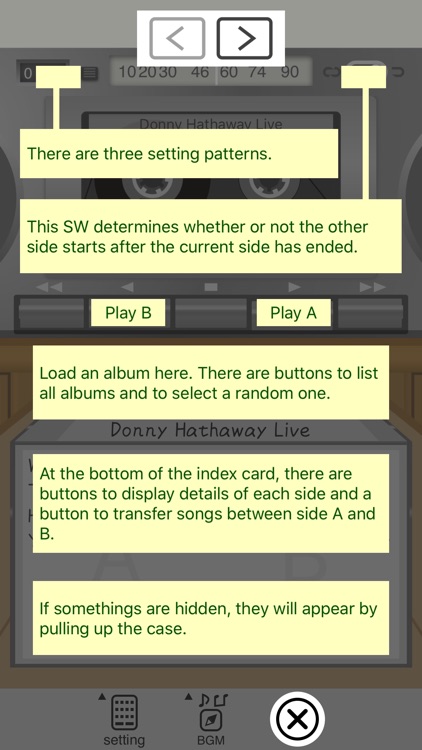 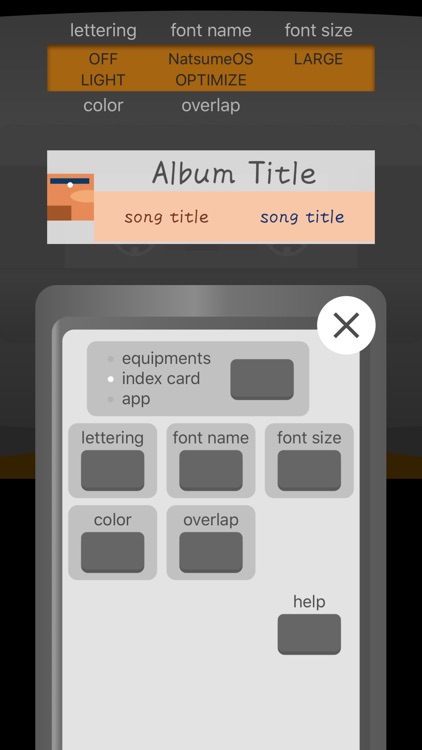 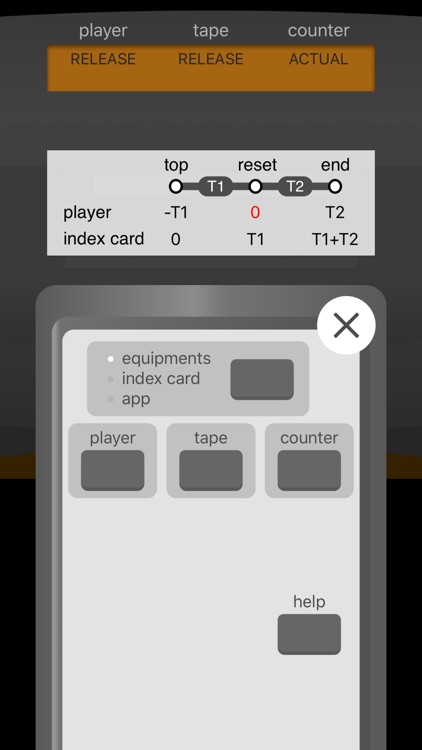 I have reproduced experiences of listening music with a cassette tape.
For example, changing rotation speed of reels based on tape amount, animation of wrapping end of the tape to reels, the player with counter and auto reversing, a sound of operation, song list like cassette index cards, lettering album title.
Would you listen to albums like you did in old days?


What you can do
You can strain to hear before the first song starts.
On skip operation, The tape may run over the position you want to set at.
You can skip efficiently with referring the counter.
If difference occur in counter, you have to back to top of side A and push the reset button.(*)
While you see the song list, you can realize which order the current song is on its side, and connections to a previous or next song.
You can switch a song experimentally by pressing the button to play the other side.
If you cannot get a current song name, you can infer which song is playing from the amount of tape on each reel.
You can look at the tape that seems to be about to end but doesn’t readily end.
The sound of changing side makes you feel renewing and expectations of a new side.
You have to push the start button again if auto reverse doesn’t work as the setting.
With albums released in CD, you can bother which boundary separates it into A and B.
You can verify changing speed of rotation while fwd or rev processes.
You can be deep in lingering of the album with reels rounding after the last song played.
The mechanical sound at end of tape makes you feel a sense of achievement and a little missing.

(*)The ways that avoid time and trouble are included.


How to use
Select an album and play it.


Features
An album is divided into two sides automatically.
If a result of auto dividing is not desirable, songs can be transferred by an operation.
Auto reverse(none, A to B only, both ways).
Index cards represent song information as cassette tapes do.
You can now use handwritten fonts for the characters of index cards.
Selecting an album at random If you do with “random” button.
Index card colors are sourced from album artworks.
Album title lettering which is like a printing sheet.


Caution
This app imports music included in the device as an album. Cloud sources don’t be selected.
The button drawn right direction on the player is assigned playing side A. Left direction is side B.
Auto dividing executes as even as possible. A result of dividing may differ from actual dividing of an album.
You can’t change song order.
This app plays songs with using the iPod function on iOS. Another app using it as same may courses problems.
Playing time is one minute longer than displayed time.(In case of 46minutes tape, each side has 23+1=24minutes)
Lengths of tapes are about 10 kinds as actual. Albums having over 120 minutes songs are added a few blank minutes.
After you change song division, the length of tape change to fit time.
This app uses year data set in a song. If a set year is newer and an actual year is older, it is treated as a new one.
When an album you played once is selected, it is set the previous position. But you can’t know which side played last time.
Sound effects like tapes(hiss noise, warm high frequency) don't be installed.


About playing in background
You can listen to music behind another app by two ways.
1: Close this app by pushing the home button(as you usually do) - it plays songs in the current side only.
2: Before you close this app, change to BGM mode - it plays blank time after the last song, plays machine sound at end of side, obeys setting of auto-reverse. To change to BGM mode, you tap the button(drawn browser and musical notes) in the bottom while playing a song. In case setting of auto-reverse is endless, it plays whole songs a few times.


While you listen to an album with a tape, blank time is part of it. This is the concept.
This app divides the album into side A and B and adds blank time on each end. 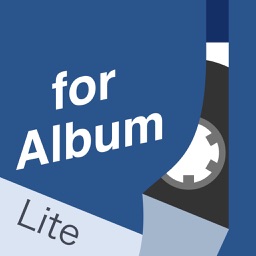 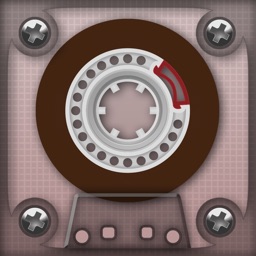 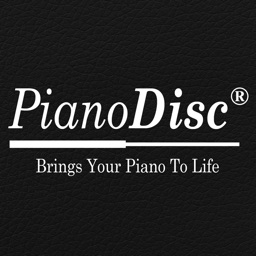 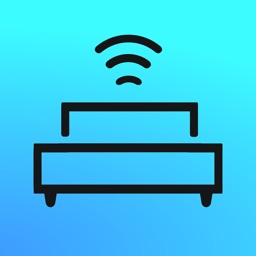 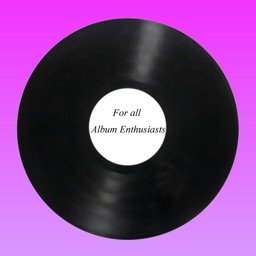 Yuki Kuroki
Nothing found :(
Try something else