Play the best Strategy game ever! 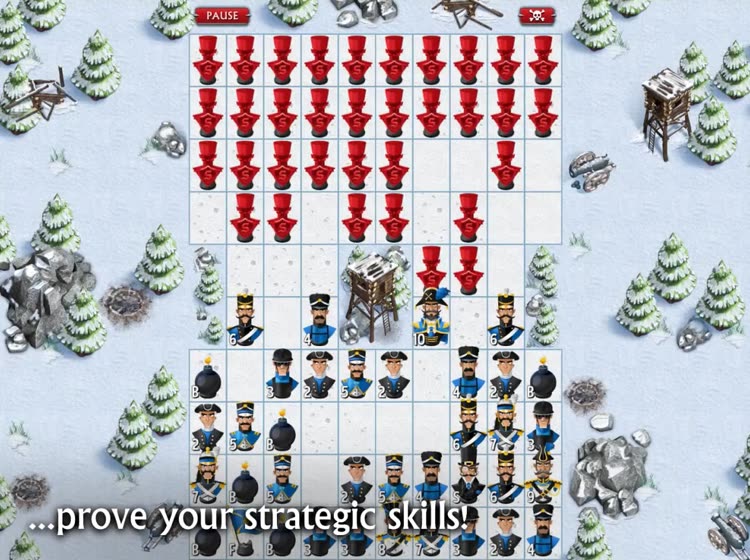 Stratego ® Single Player is $2.99 but there are more add-ons 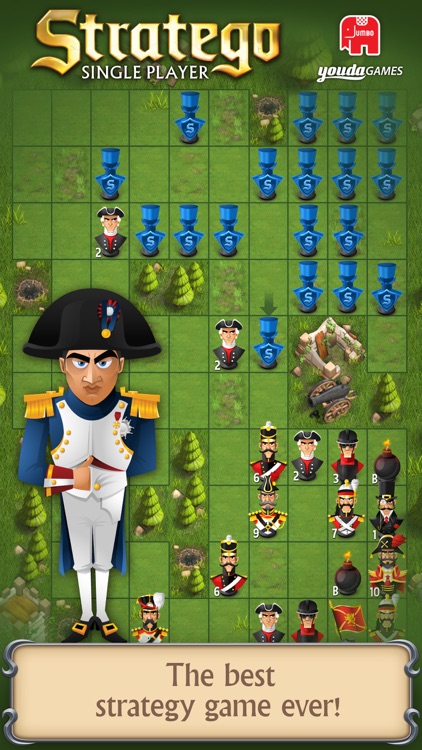 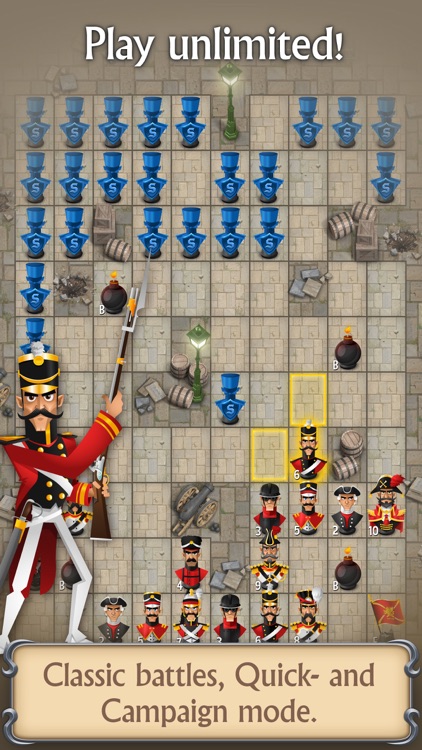 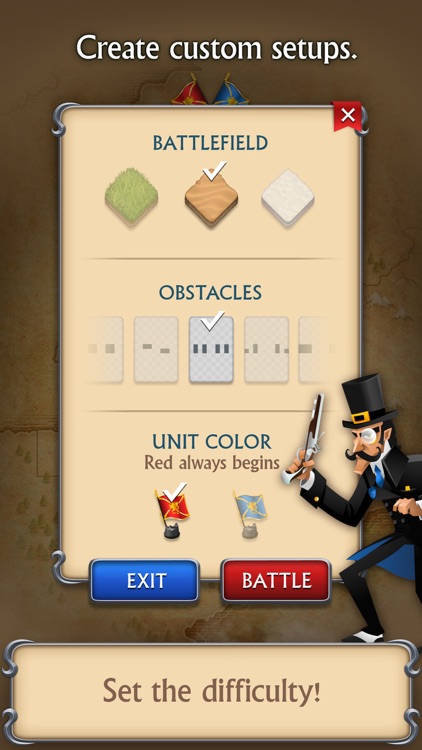 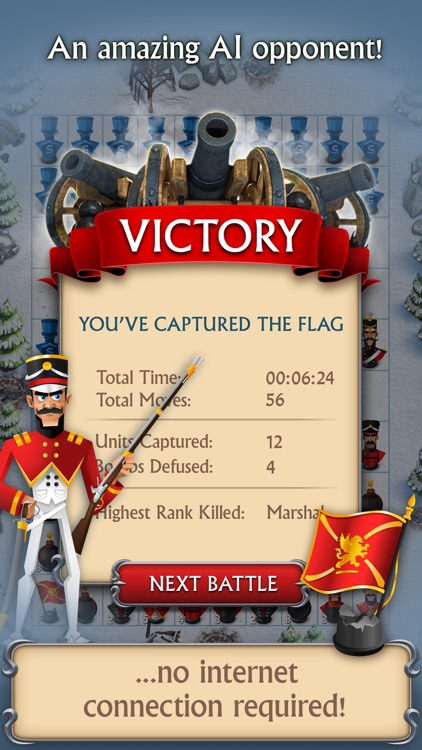 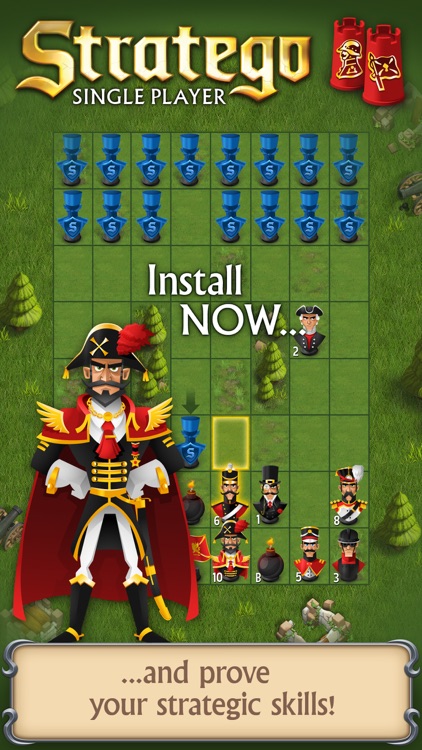 Play the best Strategy game ever!
Stratego® Official Single Player from Jumbo is all about good tactics, strategy and cold hard bluff, a combination of chess and poker. A Strategy battle game that has been played by millions of board game players and is now available for your iOS device.

This official single player Stratego comes with a new and improved AI opponent, with adjustable difficulty to match your skills. Play as many battles as you like, and keep track of your tactical skills in the overall battle statistics. Defeat the enemy in a ‘classic’ 40 v/s 40 battle game, a ‘quick’ 16 v/s 16 battle or play a full Stratego campaign. Attack and Defend your army and nation in this tactical war game and become a true hero in battle.

• Unlimited Stratego battles
Play as many Stratego games as you like, with unlimited enemy setups and strategies.
You have to play tactical with a great defense or attack plan.

• Single Player Stratego AI Engine
A completely new Stratego engine to challenge beginners and veteran commanders alike.
Refine tactics to match the countless playing styles of the opponents. Watch how they fall for your ultimate strategic bluff! Make sure you defend your flag, as opponents will send their armies to capture it!

• Play offline Stratego any time and everywhere, no internet required for this Strategy game!
No live internet connection is needed to play a thrilling game of Jumbo's Stratego. So you can just play offline anywhere you want! Don't wait for human players that don't respond or quit the game halfway through. No internet, just like the official boardgame, but more fun and challenging battles than any other multiplayer defense game online.

• Classic Stratego, Campaign and Quick battles
Play Stratego in the classic 40 vs 40 setup. Battle through a war campaign map with great challenges and a good story. Or choose a Quick battle and prove you can fight with an army of only 16 soldiers.

• Multiple Campaigns
Show your Strategic skills in the campaign mode and win 10 battles in a row against unique enemy setups. Unlock new campaigns and fight against Napoleon Bonaparte and other great world leaders on the battlefield. This additional purchasable campaign features 15 exciting campaign levels that will take you all across the wars in Europe during the 19th century. Visit the city of Paris and ice cold Moscow, see the pyramids in Egypt and finish with the famous war battle of Waterloo.

• New unit rank design
You can battle with the official Stratego army units known from Jumbo's board game or select the fun new unit styles that are optimized for mobile. The units have great HD Graphics and their ranks are made clear for easy playing on your mobile device. The graveyard menu will show stats off fallen units for easy gameplay.

• Difficulty setting
Set the engine to the mode that suits your strategic skills best.
Are you a beginner or can you handle the clash in the star mode for true warfare leaders.
This Stratego game also has a great tutorial that will teach Stratego and will help to improve tactical skills.

• Customizable setups
Select one of the army presets made by Stratego pros and champions. Or customize them to your liking for your best defense setup. Your customized board setup will be stored for future battles.

**NO INTERNET CONNECTION REQUIRED**
You don’t need an internet connection and you don’t need to wait for other players to join.
Are you a strategic player? Do you like board games and tower defense games? Interested in real time war games? You’ll love Stratego! Defend your Flag and don’t hesitate any longer. Download and Install NOW and prove your battle and strategy skills with Stratego® Single Player!

NOTE:
Please contact Youda at support@youdagames.com if you have any issues or suggestions, we would love to help!

Get ready for the ultimate strategy war game and join the rapidly expanding group of Stratego fans : https://www.facebook.com/Stratego 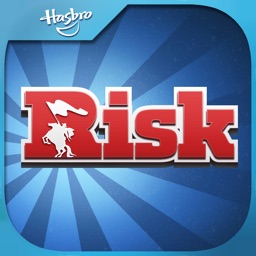 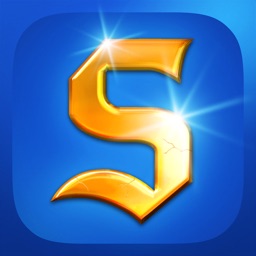 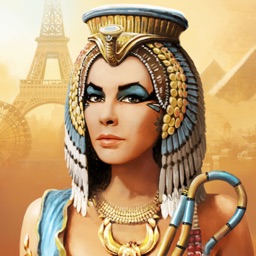 Czech Games Edition
Nothing found :(
Try something else