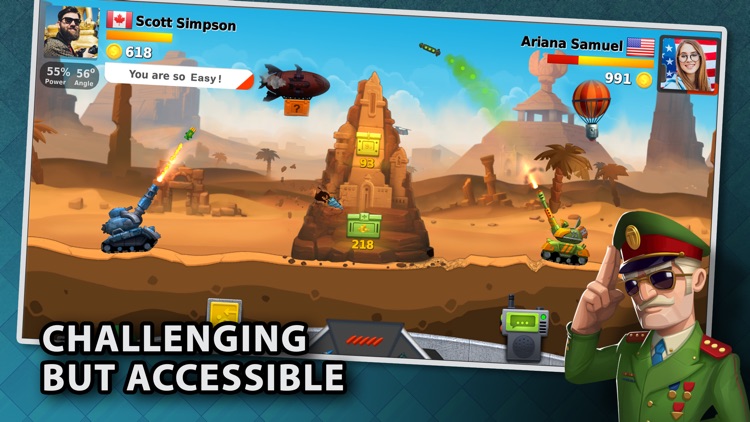 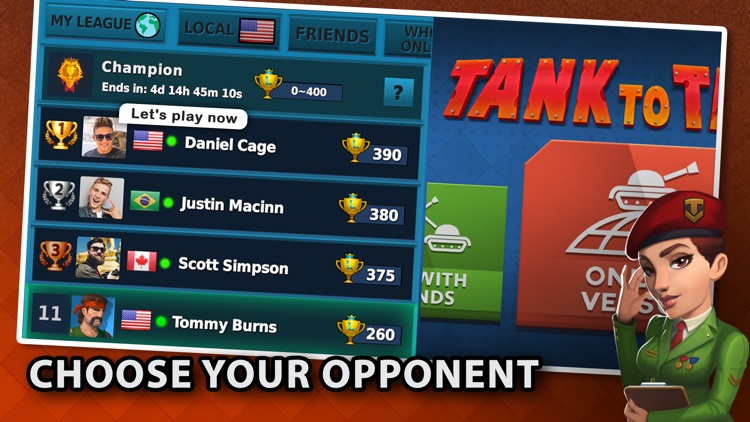 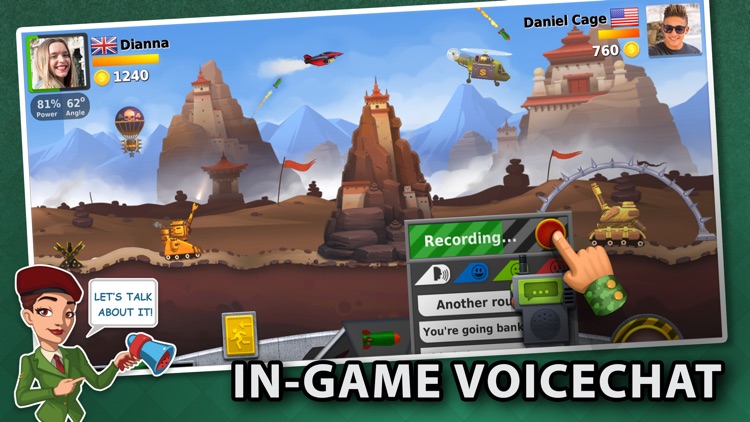 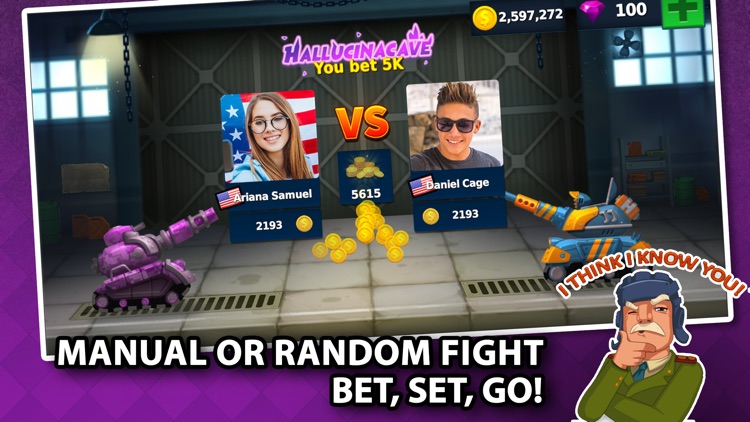 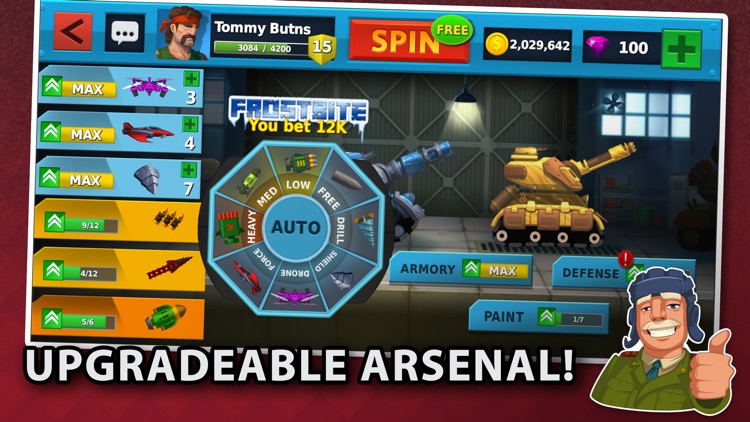 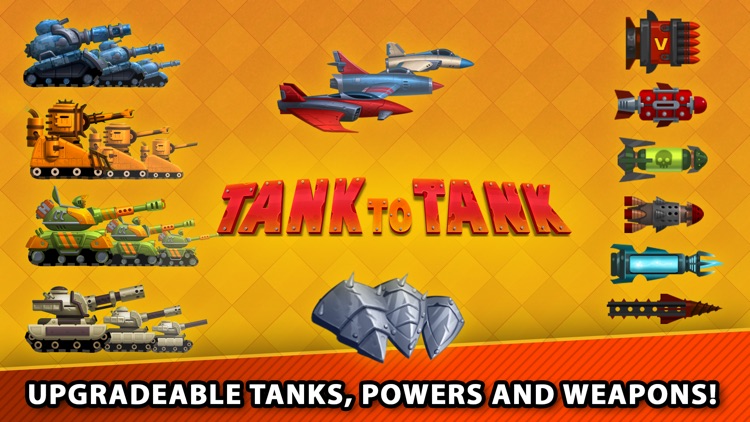 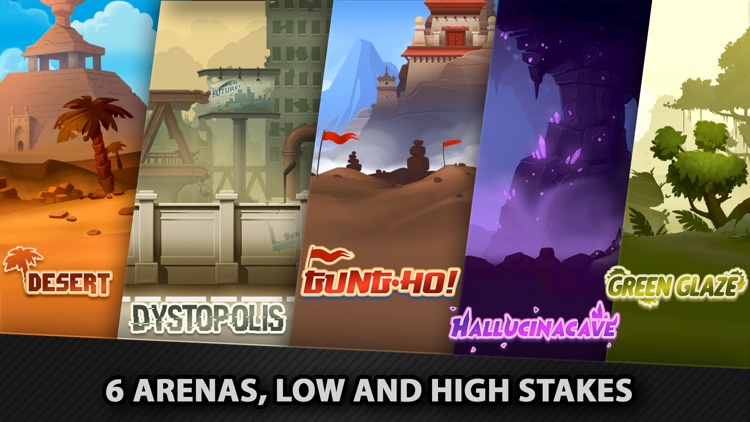 A fast-paced turn-based experience. Cool weapons and dope tanks. Nice-looking stages and environmental hazards. Battle with friends, make friends in battle! Sounds fun, right? Well it is!
In this accessible turn based game, You’re free to choose your opponent. Compete, and find new friends.
Duel in a tug of war style with your competition. Earn and lose coins based on blows dealt or received. Use the tools in the field to your advantage to achieve a flawless victory or return from the verge of defeat and conquer your rival epic style.

IT’S FOR EVERYONE! You can enjoy Tank to Tank’s easy access gameplay regardless of your skill level. Even leaderboards are matched to you so to keep you having fun!
NO PRESSURE! You’re given coins at every turn.
COMMUNICATE WHILE FIGHTING! Different tools – including a radio that lets you record and send voice messages – to chat with and taunt your opponent.
COLORFUL VARIETY multiple arenas, tanks, guns, power attacks, upgrades and stage elements that add depth to your experience.

Features:
• Fun, engaging and accessible gameplay that anyone - core and casual gamers - can enjoy.
• Coins abound! We're dedicated to make you have fun and we stand by our slogan. Match-requested a friend, but they don't have enough coins? Send them a free coin box! Out of coins yourself? Give the wheel a spin and you're good to go! Don't want to spend much on coins and gem packages? We have regular promotions.
• Go head-to-head with friends, an opponent of choice from the leaderboards or practice with yourself before jumping into the battlefield
• In game communication using emojis, presets of phrases and a military radio you can use to do voice chat
• Climb up the ranks in the regional and global leaderboards and engage with more experienced players as you journey to become the world's top player
• Engage in tournaments and defeat enemies one by one to become the champion
• 6 vibrant colorful arenas to choose from.
• Progress, level-up and upgrade your tanks and weapons for stronger defensive/ offensive capabilities
• A heavy arsenal of tanks – customizable with skins - and weapons with more to unlock with progress.
• Special powers to turn the tide: Shield, Airstrike and Drone
• A variety of stage elements that add depth to the gameplay: Airships and choppers that carry coins, Balloons that carry bombs and coin chests buried in the mountain.

Engage in super easy access 1v1 arcade battles with players from all around the world. Pick anyone out of the leaderboards, send a match request and jump into a real-time battle with them. Voice Chat with opponents. Brag, boast and become friends.
Each opponent has a side of the screen to themselves with a mountain in-between them. In a turn-based style combat, opponents take turns to shoot heavy artillery projectiles at each other in order to damage and defeat their adversary.
Each successful hit, decreases the receiver’s coins and adds to that of the attacker. In the end, the player that reduces their adversary’s coins to zero or has the most coins at the end of the countdown wins.
You can try to interact with and mislead your opponent by using a variety of emojis, preset texts and even recording voice messages using the in-game military walkie-talkie. Stage elements are also present to help you inflict further damage onto your enemy.

Similar Apps to Tank to Tank 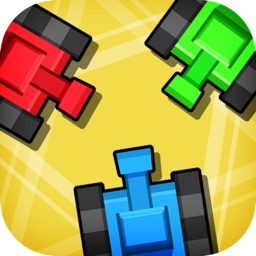 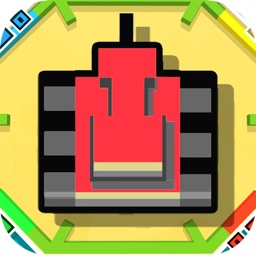 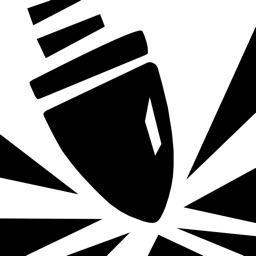 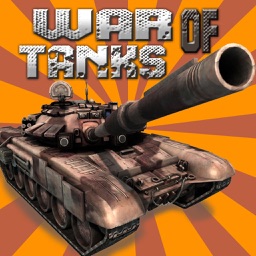 War of Tanks at frontline 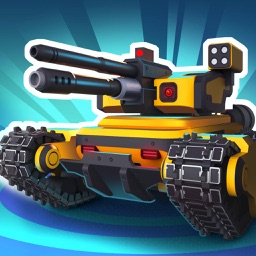 AKPublish
Nothing found :(
Try something else