Team Shake provides a technological and environmentally friendly way to choose teams for board games, sporting events, tournaments, school projects or anytime groups are required. The newest release brings many new features including full iPad support, balancing teams based on skill or gender, importing users from a file, enabling video output, and sharing teams via facebook or email. 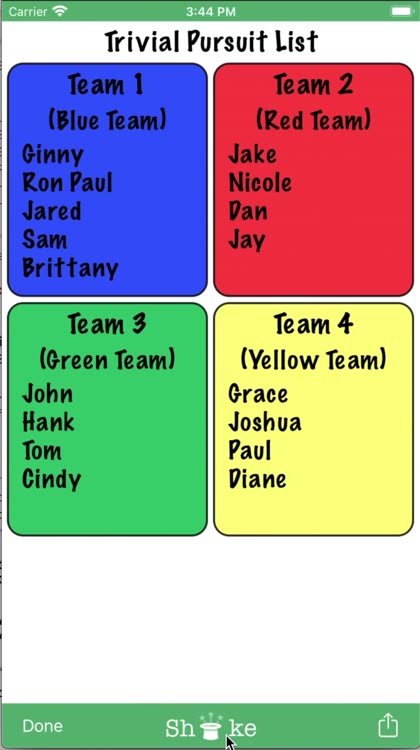 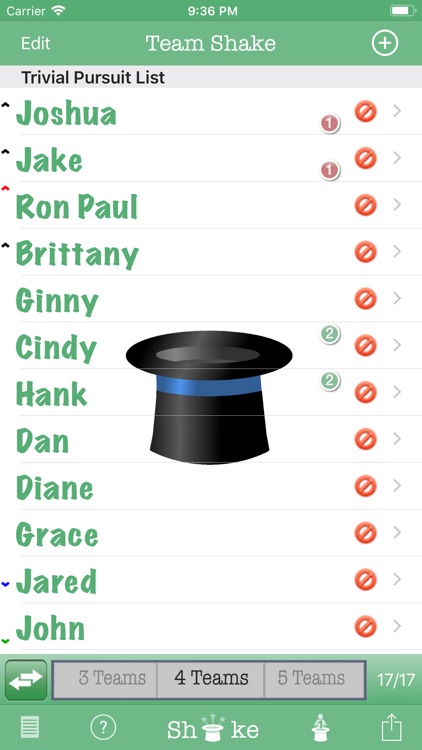 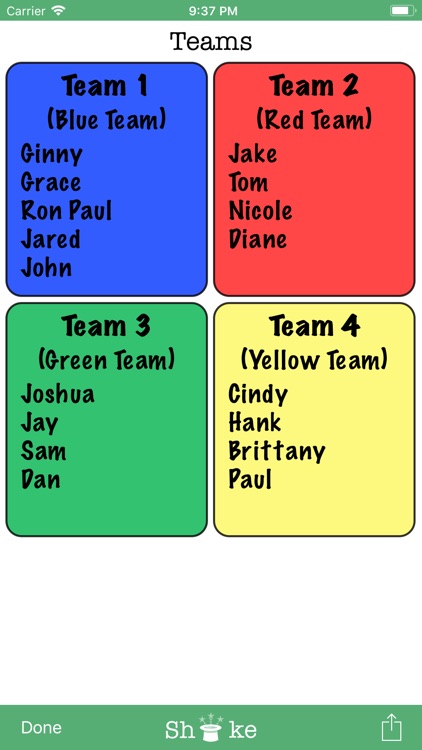 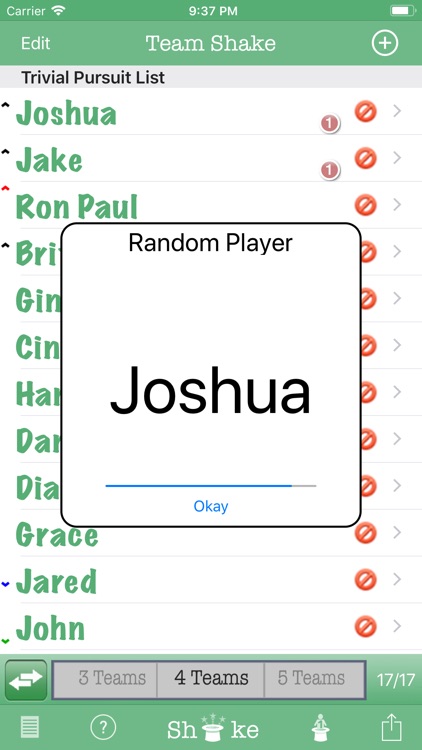 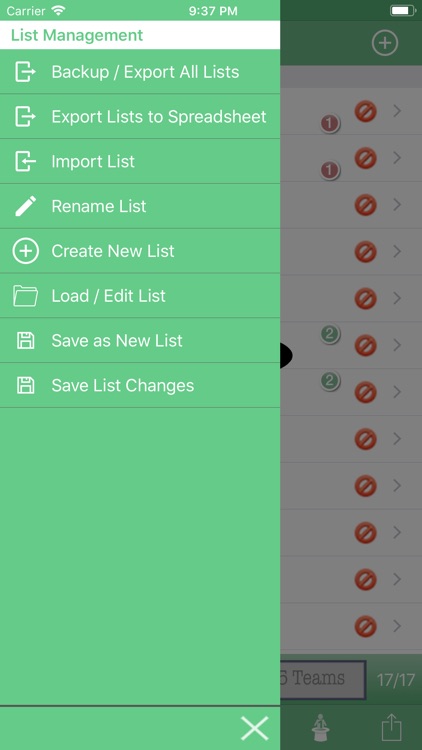 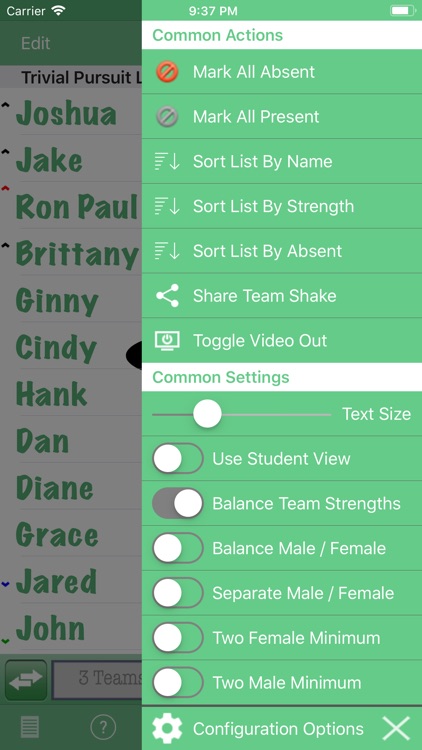 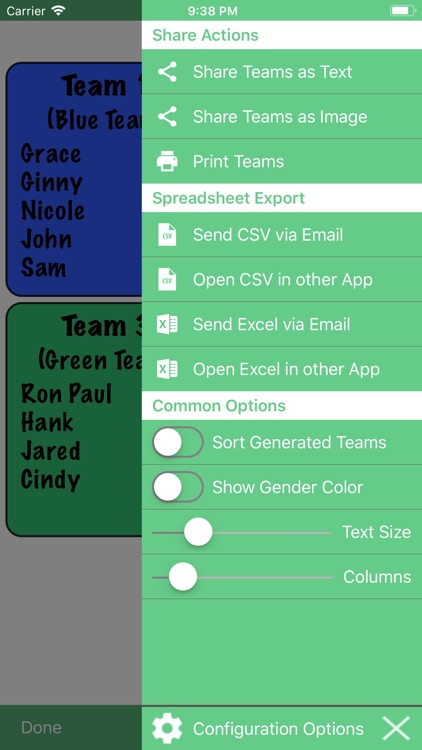 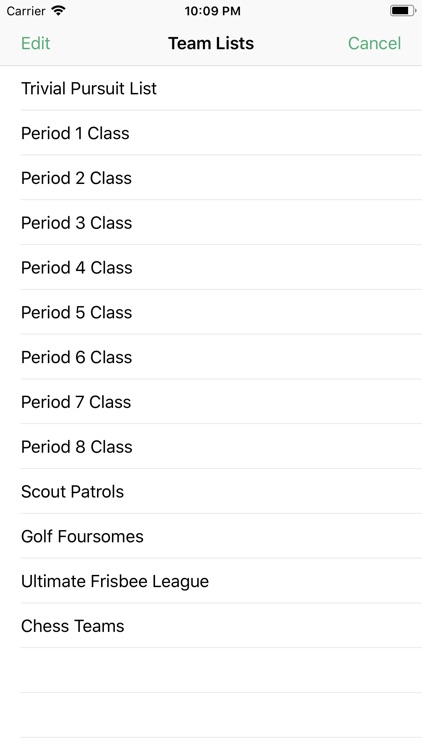 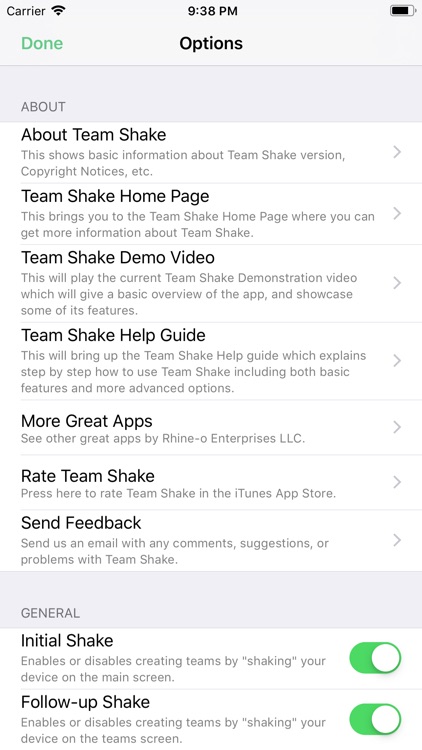 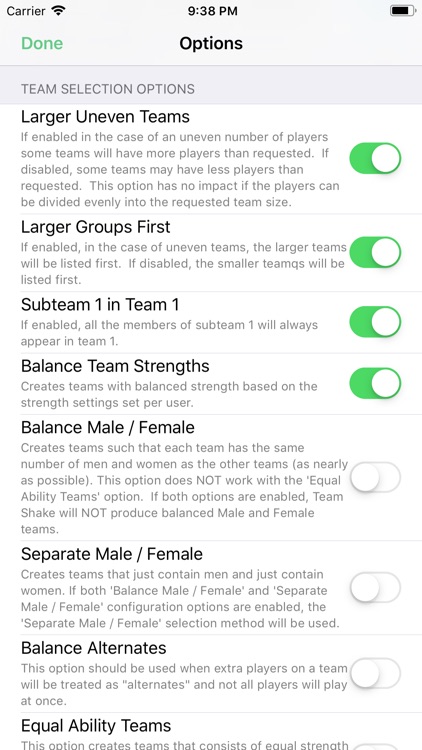 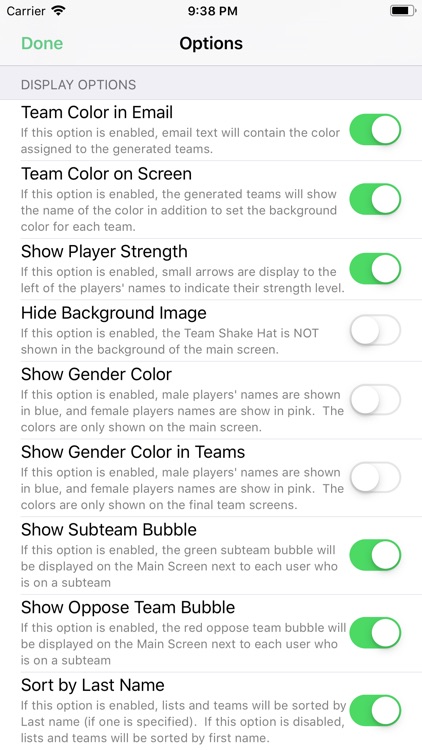 Team Shake provides a technological and environmentally friendly way to choose teams for board games, sporting events, tournaments, school projects or anytime groups are required. The newest release brings many new features including full iPad support, balancing teams based on skill or gender, importing users from a file, enabling video output, and sharing teams via facebook or email.

Team Shake is the premier iOS App for creating teams. Instead of a hat and scraps of paper, the user enters his friends' names in his iPhone and gives it a shake. The screen will then display a random set of color-coded teams. These teams can immediately be used for game play or shared via facebook or email. The quick and easy selection of random (or balanced) teams eliminates fighting over who will be on which team. Innovative use of the iPhone shake gesture gives users the satisfying feeling of shaking a virtual hat without the trouble of carrying around an actual hat. Conventional buttons can also be used for those who would rather not shake their expensive hardware about.

The app is designed with ease of use and simplicity in mind. Names can easily be entered with the onscreen keyboard, chosen from the user's contacts, or imported from a file. The email and facebook functions document the members of each individual team as well as preserving the team number and color assigned by the app. For repeated use of Team Shake, lists of friends can be easily saved and loaded later. The current list is also automatically saved so that if you exit the app, or even reboot the device, changes will not be lost. For teachers and others with large lists of people, Team Shake supports the ability to import teams from text or csv files.

If you have any problems, feature requests, or comments please send an email to support@rhine-o.com.

* Create 1 to 64 random teams
* Create completely random or balanced teams
* Full iPad support
* Eliminates fighting over choosing teams
* Share / Save teams via email or Facebook
* Teams can be chosen by the number of teams or by the size of teams.
* Save lists of friends for later games
* Import lists from email or spreadsheet
* Export lists and options for use on another device
* Satisfying feeling of shaking a “virtual” hat to create teams
* Animated shaking hat
* Entry of names via onscreen keyboard
* Entry of names via iPhone contacts
* Temporarily disable people who are absent
* Set groups of people to always be on the same team
* Set groups of people to always be on different teams
* Set user strength to make more even teams (now supports fully balanced teams)
* 5 users strengths level
* Pick a single random person from the list of players
* User strength indicator on the main screen (can be disabled in options)
* Number of active players and total players is now displayed on the main screen
* Video Out Support
* Option to Sort Teams by Name
* Option to balance male / female team members
* "Equal Ability" option to create teams where all players have the same strength
* Option to create separate male and female teams
* Configurable Team Colors
* Configurable Team Names
* Print Support
* Export Teams in CSV or XLS Format
* Team Shake now supports simultaneously assigning players to multiple subteams and / or oppose teams at the same time.
* Subteams / Oppose teams can now have customized names to make selection easier
* Subteams / Oppose teams can now be enabled or disabled globally so that teams can be made quickly without subteams / oppose teams. In particular, Balance Teams Strengths will work when separate Male / Female teams are created. 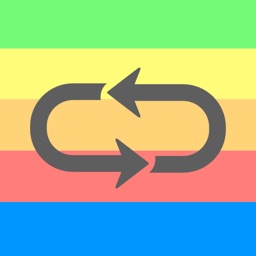 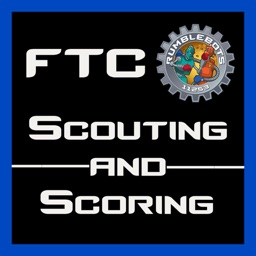 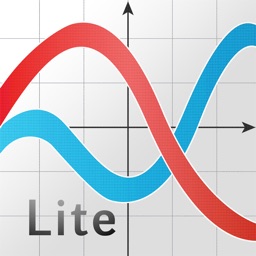 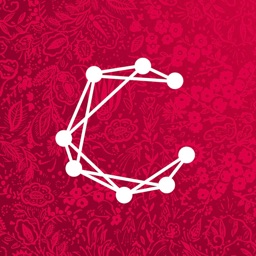 The Congress of Polish Student Societies in the UK 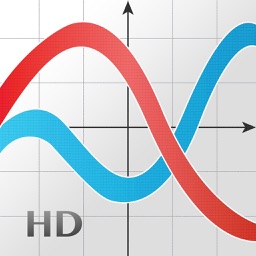 Marcos Alan Gonzalez Schtulmann
Nothing found :(
Try something else