You are using an outdated browser. Please upgrade your browser to improve your experience.
by AJ Craig
March 20, 2009

LG has confirmed that Apple is preparing to launch a batch of products that will come equipped with OLED screens, according to the Australian magazine Smarthouse.  New notebooks, flat panel monitors, and iPhones will have OLED goodness, according to the rumors.  These displays are reported to be part of the multibillion dollar deal Apple made with LG last year to produce displays for Apple. So what would this mean iPhone users? Well, if an OLED display is used on the next iPhone it will be lighter, thinner and most importantly - have a longer battery life. Anyone who has installed iPhone 3.0 on their device will tell you that battery life is continuing to get worse with all the new shiny features (push, spotlight, etc.) that have been added. If you are not familiar with OLED (organic light emitting diode) displays, basically it is a thin film of organic molecules that create light when electricity is applied.  So why should the average consumer care? OLED displays have many advantages and are widely regarded as the technology that will take over the next generation of flat panel displays. Here are just a few benefits: All these reasons contribute to why OLED is being considered by many as the holy grail of TV Display technology.  (read this if you would like to learn more about OLED technologies).  This is new technology, but has already been placed in some consumer devices, like the Samsung WB100 camera. No rumors have yet to be confirmed, but we will keep our eyes out for any new developments. 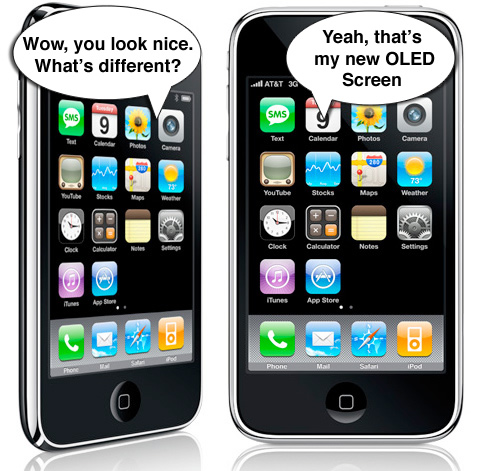 Next iPhone To Have OLED Display? Why Should You Care.

Next iPhone To Have OLED Display? Why Should You Care.
Nothing found :(
Try something else