You are using an outdated browser. Please upgrade your browser to improve your experience.
by Tyler Tschida
April 6, 2009

Last week we caught word from a DigiTimes report that stated Apple had tapped OmniVision to supply them with 3.2-megapixel CMOS image sensors for the next-gen iPhone.  Since the next-gen iPhone has never been officially confirmed, nor will it until its actual release, we have to take most of these reports with a grain of salt.  Over the weekend however, one of our sharp-eyed writers spotted a couple of job listings on Apple's Job Opportunities page that may help solidify the report as correct. The first job listing is for a Camera Project Manager for the iPhone.  The listing, which was posted on March 16th, indicates Apple is currently looking for a person with solid CMOS image sensor experience:

The iPhone Engineering Group is looking for a Camera Engineering Project Manager (EPM) to drive the design, development and integration of camera modules across iPhone and iPod. The EPM is the interface between our internal engineering teams and the suppliers of sensors, lenses and camera modules.

The most intriguing part of the job listing is that they mention integrating a camera into an iPod as well. The second job listing that references the iPhone's camera was posted only a day later, on March 17th.  This job listing is for a Camera Design Engineer for the iPhone:

The iPhone group is looking for a Camera Engineer with responsibilities for evaluation, qualification, implementation and tuning of camera subsystems in iPhone products. Duties include research into both current and future camera technologies, evaluation of proposed solutions, executive presentation of current and future options, working with suppliers to customize modules, working with both product design and electrical engineering to physically and electrically integrate the parts, tuning the solution for optimal image quality, and design of production line testing setups.

It is possible that these listings may not even concern the next-gen iPhone that is expected to launch this June or July.  Considering they were only posted about 19 days ago, it seems unlikely that this would give anyone enough time to become acquainted with Apple's system before full production of the next-gen iPhone needs to begin, but it is possible.  Integrating a camera into an iPhone or iPod isn't a one man show after all. Even if these listings aren't for the next-gen iPhone, it at least proves that Apple is hard at work at improving the iPhone's current camera offerings.  The single sentence that mentions a camera being integrated into an iPod is also quite interesting.  It could be a simple misprint, or it could mean that Apple is taking the iPod touch more seriously as a multi-use device.  It's hard to believe that adding a camera to the iPod touch would cannibalize sales of the iPhone, so why not give iPod touch users an added perk? UPDATE: It has been brought to our attention that Apple has since removed the iPod portion of the Camera Project Manager listing.  It now only states, "development and integration of camera modules across iPhone."  Whether this was a typo, or Apple has something to hide remains to be seen.  Thanks to our reader Mappy4ever for the tip! 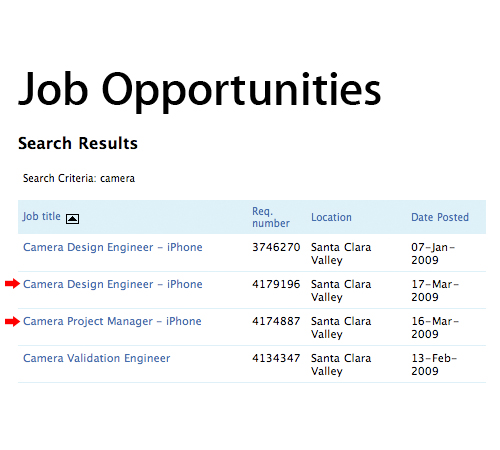