You are using an outdated browser. Please upgrade your browser to improve your experience.
by Tyler Tschida
April 25, 2009

For the last few months we have been reporting on AdMob's mobile web traffic results and during that time the iPhone has faired extremely well. The iPhone has consistently led mobile web use by smartphones in the U.S., but never worldwide.  It looks like for the month of March things have changed because the iPhone has finally overtaken Nokia's Symbian OS by a single percent.

These results are simply based on mobile web use, not device sales.  They basically show that people enjoy using their iPhone's for web surfing more than any other device.  Also worth noting is that the iPod touch isn't included in smartphone mobile web traffic use since it obviously isn't a phone. 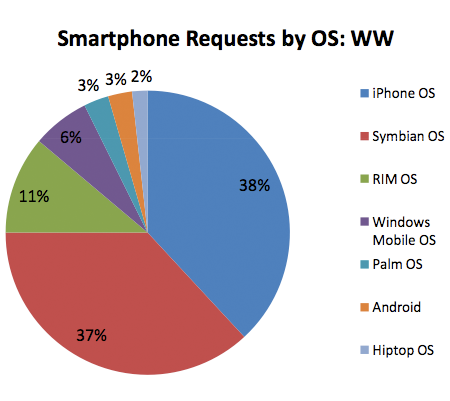 iPhone Leads US & Worldwide Mobile Web Traffic Use
Nothing found :(
Try something else