You are using an outdated browser. Please upgrade your browser to improve your experience.
by Dave Clarke
April 26, 2009

All of you World of Warcraft fans out there try to contain yourselves; it appears as though software developer Vollee has posted a video on YouTube, which allegedly shows an early port of World of Warcraft to the iPhone. WoWInsider posted a link to the video evidence yesterday but the people responsible for it on YouTube have made their profile private and as such, is no longer viewable to the general public. Having viewed the video prior to it going private, I can tell you that I personally don't believe that it's a fake but in fact a early build of WoW for the iPhone. WoWInsider also shares that view and points out that the developer who posted the video, Vollee, has already been contracted to port Second Life to the iPhone and that they previously announced a partnership with Activision. Finally, they go on to say that Vollee has also indicated that they'd be working on the iPhone in the future. Given all those facts and then now to have solid video evidence, the iPhone and iPod touch fans of the world who also share their love of World of Warcraft might be in for a delightful suprise sometime in the future. No time frame or information about it's release was talked about in the video so it's anybody's guess as to when we might see this hit the App Store. Update: Thanks to einars15 for making a copy of the video available on YouTube: 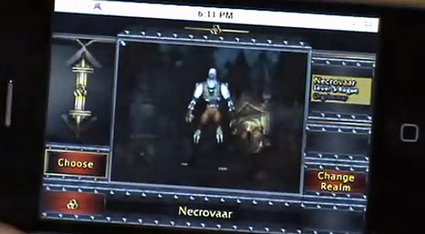 World of Warcraft For iPhone Caught On Video?

World of Warcraft For iPhone Caught On Video?
Nothing found :(
Try something else