You are using an outdated browser. Please upgrade your browser to improve your experience.
by Matt Fox
May 19, 2009

I starting playing these games back in '94 on my original Playstation and now one of the hottest racing franchises ever has hit the iPhone/iPod Touch...finally! Race a multitude of different cars as you blow by the cops, take out your rivals, and become the top driver in the city. You can also go undercover and unlock secret missions and much more.

There are lots of features in this version of Need For Speed and I would expect nothing less. So many in fact, I'm not really sure where to start actually...how about the controls?

The game comes with a bunch of different features while you are racing in terms of the controls and what does what. Obviously you tilt your device to turn left or right. Turn your device quickly left or right to begin drifting around a corner. To ignite your nitrous boost just swipe your finger upwards and watch the car take off. Swipe downward and you initiate the Speedbreaker option to slow things down and maneuver around traffic and the police. The car constantly accelerates for you so all you need to do to slow down is touch the screen anywhere and the car brakes. There's a few other things as well like dragging two fingers down to pause and the ability to zoom in and out and move the camera around in the garage by moving your fingers around the screen.

Other than the control options, you have the cars...because what's a racing game without cars, right? In this game there are 20 different cars that you can use from the Porsche Carrera GT, Nissan 370Z (Z34), Lamborghini Gallardo, Mitsubishi Lancer EVOLUTION, Pagani Zonda F and of course plenty more. There's eight racing modes including Highway Battle, Sprint, and Cop Takeout. As with the console version, this game includes the actual filmed cut scenes starring Maggie Q as Miss Chase Linh.

As always you can customize your ride with aftermarket spoilers, wheels, body kits, vinyls, and a wide variety of paint options. There's a custom soundtrack with MP3 quality tracks of popular artists as well as the option to play your own music from your iPod too. Like I said, a lot of features are in this app.

The graphics, sounds, and gameplay are top notch in this one. It's what you would expect from Electronic Arts and they don't disappoint. The game looks really good and these screen shots don't really do the game justice. For a game that's on a phone for crying out loud, it looks amazing.

The controls and gameplay are incredibly smooth here. Very simple, yet effective and they work great. When you tilt your device to turn, the screen actually tilts with you and it really gives the feeling of cornering under extreme speeds. Unlike the console versions where it takes a long time to get money, in this you accumulate money much quicker. This is great because all you really want to do is start tricking out your ride and then racing them.

I really didn't like the fact that the car constantly accelerates for you. I understand why they did it, but you never really feel in control of the car and it gives the game a more "arcade" feel to it than anything else. Normally this would be fine, but I was expecting more from a Need For Speed title.

The music, while decent for the most part, gets old really quickly. I had the same issue with the console versions as well. Normally these games have a wide range of good music, but not this time around. There's just not that many tracks on here. Yeah, you can turn it off or put on your own, but I was just expecting more. There's no way to look behind you...at all. They couldn't have added a small rear view mirror or an option to look behind you or something? I really missed having this option. Last, the game has some lag to it here and there. It mostly happens when you initiate drifting or are going into a turn in general. It's more annoying than anything, but it's there nevertheless.

Meh. That's basically my feeling here. The game is fun, don't get me wrong. It's a very entertaining arcade racer, but is it a fun Need For Speed title? Meh. Everything here is good, but it just feels...off. I wish it was under a different name, then I wouldn't feel so disappointed here. I love the console version, but this...again, meh. I am however giving it four out of five stars because, well...it is good and this just might be the best racer on the iPhone/iPod Touch so far. It's pricey and might not live up to your expectations so be warned. Maybe wait for a Lite version first? 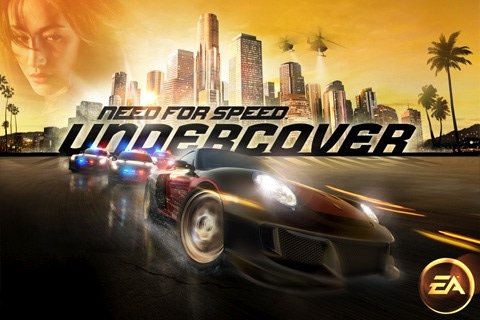 Review: Need For Speed Undercover
Nothing found :(
Try something else