You are using an outdated browser. Please upgrade your browser to improve your experience.
by Tyler Tschida
June 2, 2009

As some of you may already know, Apple released their official iTunes 8.2 update yesterday.  The main reason for the iTunes 8.2 update is to add support for the upcoming iPhone OS 3.0, which is expected to be released at the WWDC next week.  To many of you, this update doesn't really mean much, but apparently it should be a big deal to all of you jailbreakers out there. According to the iPhone Dev-Team, you must resist the urge to click that update button as iTunes 8.2 is definitely not jailbreak friendly.  The iPhone Dev-Team has posted a short message on their website warning all current and future jailbreakers not to update iTunes quite yet because:

It breaks your ability to use QuickPwn, PwnageTool, and iPhone Tunneling Suite (ssh over usb).  We don’t think this is a deliberate breakage of these tools.  It’s just that Apple has updated a low-level USB protocol that normally only Apple cares about (but jailbreakers care about).

The Dev-Team states that since this isn't a deliberate anti-jailbreak measure, it should be easy to fix.  They don't, however, intend to issue a fix until 3.0 is out, so you will just have to wait patiently. [Thanks to Odie for supplying the image!] 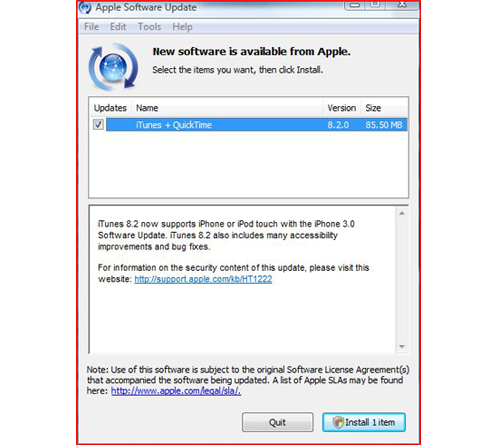 iPhone Dev Team Says Don’t Update To iTunes 8.2 If You Plan To Jailbreak

iPhone Dev Team Says Don’t Update To iTunes 8.2 If You Plan To Jailbreak
Nothing found :(
Try something else