You are using an outdated browser. Please upgrade your browser to improve your experience.
by Ian
June 20, 2009 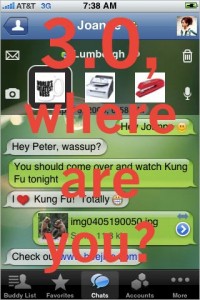 We all should be enjoying the impressive power of Push Notifications right now on a plethora of super cool apps which have been enabled with these new alerts. Unfortunately, there is no killer app for these yet. Instead, we have a hodgepodge of little more than a dozen apps like Star Defense, AP Mobile, Tap Tap Revenge and Textfree Unlimited, among others. While all are quality apps, none of them has wowed us. Textfree Unlimited and Textfree Lite have great potential. Unfortunately, a couple of messages have disappeared. Not a great debut for Push Notifications. Incidentally, also not a great debut for In App Purchases either. Gokivo, the first true Turn by Turn app for the App Store was released Wednesday at the incredible price of 99 cents. Too bad you actually had to spend another $10 to use it. And that extra fee only gets you a month of service. Initially there was absolutely no mention in the app's description that it was a subscription based model. Well, it also came to our attention that Textfree Unlimited is also adopting the subscription model. If you buy the "Unlimited" app now it is unlimited for only a year. You'll be expected to cough up some more money come 2010. They do mention that fact in the description but it's near the bottom, after several references to the app being "Unlimited." Not cool if you ask me. Way off topic though. Now back to Push Notficiations. Sure we expected all sorts of apps to take advantage of Push Notifications. We just didn't expect the apps which are currently in the store to be the only ones out there. We all know what this new service was meant for - true instant messaging on the iPhone. No longer would you have to SMS notifications as a way of circumventing Apple's no background apps rule. I asked this question yesterday. I'll ask it again today. Where are the chat apps with Push Notifications? In fact we do know where they all are. They're all being held up by Apple. BeejiveIM and IM+, the two premier instant messaging apps, both advertise their 3.0 versions are awaiting approval by Apple. BeejiveIM went so far as to tell Mobile Crunch the app would've been in the App Store yesterday. It's not available yet. AIM also had a working beta with Push Notifications over 2 weeks ago. The beta was tested by masses of developers and on phones all over the country with reports of huge success. But, of course, there's complete silence from Apple. Our calls today were not returned and we have a source who tells us Apple's private forums for app discussion are completely silent on Apple's end when it comes to Push Notifications. Even the developers, it seems, are in the dark. Our only explanation for why this is happening is that, even though Apple waited more than six months to get the launch of Push Notifications right, they're not quite ready. This isn't just conjecture. We do have some evidence in the form of missing Push Notification alerts. We have seen it ourselves and we have reports from users too. Some Push Notifications are never received. I myself never received a couple notifications for both Star Defense and Textfree. What makes the whole situation intolerable is Apple's silence. It really is deafening and it drives bloggers like yours truly who live on an instant Twitter/Web cycle to start labeling problems like this as an epic fail. Well, I'm not going to label this a failure on Apple's part yet. But I would like some answers.