You are using an outdated browser. Please upgrade your browser to improve your experience.
by Ian
July 23, 2009 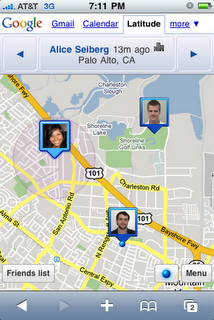 Google's entry into the realm of location-based social networking, Latitude, is now available. You can go share your location right away at www.google.com/latitude. You can even add friends and see a map of where they were when they last had the web page open. You'll also find some of the same features in Apple's built-in Maps app. Mat Balez, Google Mobile Team Product Manager, said in a blog post that deploying Latitude as a web app rather than a native app was a conscious decision made by both Apple and Google. "After we developed a Latitude application for the iPhone, Apple requested we release Latitude as a web application in order to avoid confusion with Maps on the iPhone," Balez said. The app is surprisingly responsive and interactive - for a Web app. Though it suffers the same limitation as every other location-aware social network on the iPhone. It only works when it's open. "Since there is no mechanism for applications to run in the background on iPhone (which applies to browser-based web apps as well), we're not able to provide continuous background location updates in the same way that we can for Latitude users on Android, Blackberry, Symbian and Window Mobile," Balez said. I added five of my iPhone friends and coworkers and chatted and marveled at their locations for a total of five minutes before I safely stowed this into the cool but rarely used category. That is, of course, unless Google or Apple comes up with a clever way to make location updates happen more often. Would it be so hard for Apple to provide an option in their built-in Maps app to automatically share our location on latitude every time you do a search? I use that app every single day and every time I go somewhere (which is when Google Latitude would be the most effective). "We will continue to work closely with Apple to deliver useful applications -- some of which will be native apps on the iPhone, such as Earth and YouTube, and some of which will be web apps, like Gmail and Latitude," Balez said. So here's hoping for a more integrated Google Latitude experience in Maps.