You are using an outdated browser. Please upgrade your browser to improve your experience.
by Ian
August 31, 2009 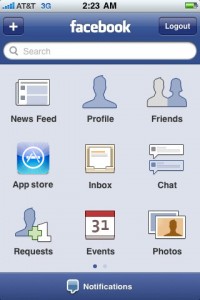 UPDATE: Response from Joe Hewitt at bottom of post and Richard explains in the comments how Hewitt pulled off his wizardry. Joe Hewitt is rapidly becoming my favorite iPhone developer. He submitted one of the most anticipated updates in iPhone history to Apple several weeks ago and then graced me with one of the first copies for testing. Though that was awesome and unexpected, that’s not why he’s becoming my favorite developer. First, he wrote an excellent piece about why Apple should eliminate the process of Apple approving apps entirely. His post is one of the most grounded and logical calls for reform to the App Store and it comes from the developer of the biggest iPhone app. If anybody has a chance of inspiring change at Apple, I think it would be him. One of the primary points he makes in his post is that developers can do cooler things if they are able to put new versions in people’s hands faster. Bugs, for example, would be squashed very quickly. “Apple limits us to 100 beta testers - you find a lot more bugs when a few million people use the app then when 100 people use it,” Hewitt said on his Twitter account. Almost to prove his point, he released a bug fix update a couple days after releasing 3.0 and used what I’m assuming is Apple’s emergency bug fix process to get it pushed through in just a couple of days. Now 3.0.1 is out and bugs are fixed just a few days after 3.0’s release. How fast would development be if developers could do that for every release and not just Apple’s limited-use emergency update? Then there’s the second reason I’m becoming a huge fan of Hewitt: I believe he might be a wizard. There’s little doubt in my mind Facebook 3.0 is a huge step forward in both function and design. Still, I found two major problems in my testing - no landscape keyboard and the inability to reorder things on the homescreen. Hewitt either tricked me by giving me an incomplete copy of the app or he performed some serious App Store witchcraft because both those issues were solved in the version everyone now has on their phones. I lean toward him being a wizard. Either way, it’s great to have those features on our iPhones now rather than later. Then there’s also the third and most important reason I’m becoming a huge fan of Hewitt: I think there’s a chance Facebook 3.0 is a precursor to the release of an App Store within an App Store. Hewitt has introduced a major design concept of Apple’s into Facebook 3.0 in the form of a customizable homescreen. He’s taken the natural feeling we get from adding apps to the homescreen of the iPhone and ported it to the homescreen of Facebook. You can add pages and profiles to homescreens and swipe between them just like you do apps on the iPhone. In its current iteration, however, the homescreen is no more useful than when Apple first added the ability to add bookmarks to the iPhone homescreen. Remember, Apple released that functionality in January 2008 and then followed with the App Store in July. For six long months all we could do was add shortcuts to Web sites on the homescreen. With Hewitt’s Facebook 3.0, we’ve got essentially the same thing - the ability to add shortcuts to profiles and fan pages. So could Facebook’s app become a platform within a platform in six month’s time? I’m not an iPhone developer, but I have to wonder if it is possible for Hewitt to build frameworks that can be accessed by Facebook apps from within the iPhone app itself. I sent an email to Hewitt and asked him about this directly but I haven’t heard back. So I send this question out to all our developers out there - is this possible? Could you search for apps and install them to your Facebook homescreen without requiring Apple’s approval every time? If so, imagine the possibilities. I’m talking social networking that can actually change your life. A Facebook Maps app could help location-based social networking finally take off because Facebook could overcome the problems facing Loopt and Latitude. Only Facebook has enough users to could actually fill a friend map with more than half a dozen people. And, in the absence of background processes, only Facebook is used often enough that location updates would be relatively current. Movie reviews could be friend-sourced so you wouldn’t have to depend on the moronic opinions of the strangers on rotten tomatoes. You could depend on the reviews of your moronic friends instead. They might have bad taste in movies but they’re your friends and you tend to trust them more. Flixster is already bringing much of this functionality to both Facebook and iPhone, albeit separately. On iPhone, the recently released version 3.0 of Flixster is almost seamless. You can do your own reviews, share them on your Facebook profile and make a list of upcoming movies you want to see. Flixster’s implementation is so slick it looks like it belongs within Facebook itself. With Facebook 3.0’s homescreen implementation, I think it should be. Take a look at this simple mock up I put together in about five minutes (click it to see it larger): 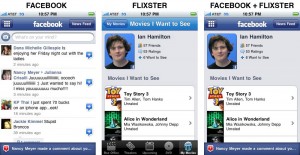 I find it very interesting how easily Flixster was able to fit inside Facebook. It really does look like it belongs there. 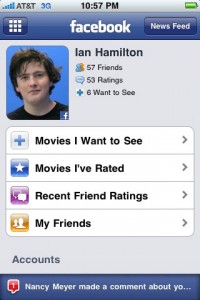 Check out the image at right too. That would be how Flixster’s landing page would look inside of the Facebook app. You could use the Flixster app on Facebook to socialize about movies and do things like chat with friends about an upcoming film as well as rate or review movies you've seen. Then you would drop into the Flixster app for more advanced functionality, like purchasing tickets or searching for showtimes. This is just one potential use. You could add Facebook apps for restaurants, television, books, sports and everything else people do. Imagine live blogging the premiere of Lost with your friends, posting your favorite restaurants to a food app while chatting about your favorite dishes and also drafting a fantasy football team. I could be wrong, but I can’t imagine this being hard to implement. It would simply be the next iteration of Facebook Connect for iPhone. So while we wait for Push Notifications to come in 3.1 and I pray Facebook is speedy about converting their massive video collection to Quicktime versions that play on iPhone, I invite you to ponder the future of Facebook for iPhone. What would you do with a Facebook App Store within an App Store? One last thing. Hewitt, if you’re reading this, please move the “done” button to the bottom of the screen when rearranging icons. I’ve hit the iPhone home button to make the icons stop wiggling at least a half dozen times and many of our readers have too. UPDATE: Hewitt's response, "I don't think Apple would be too fond of us allowing developers to build apps that skirt the App Store by running within our app.  That doesn't mean there aren't examples of where such apps would be useful, but at this time I'm not planning on supporting that."