You are using an outdated browser. Please upgrade your browser to improve your experience.
by Staff Writer
September 15, 2009 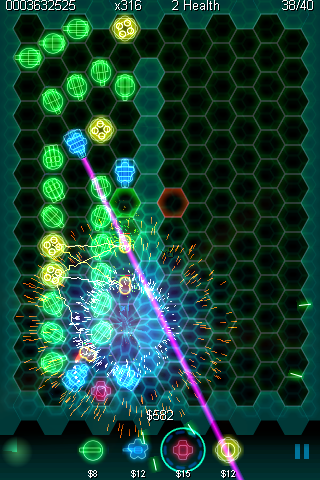 geoDefense Swarm follows the well received original geoDefense. The same style is included, but instead of fixed path tower defense it’s now open field. Every level provides a unique challenge on a grid composed of hexagon shapes. Now the paths aren’t given to you, but rather you have to build the mazes with towers. In open field tower defense you place towers to set up mazes that the creeps have to go through. Each tower costs money, and you have a pre determined amount to start, and earn more for each enemy you destroy. Your goal is to defend your base from a certain number of waves of creeps. A bunch of new features are included that weren’t seen in the original. 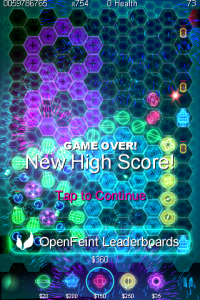 In total there are 30 levels with each one requiring a completely different strategy than the previous one. The 30 levels are split in 10 across three difficulties: easy, medium, and hard. Every level is unlocked from the beginning so you don’t have to beat easy levels to play the harder levels. Quite a few features lacking from the original are included at launch in Swarm. The first new feature is endless mode which was the most requested feature from geoDefense. The last level of each difficulty is endless mode, so now there are three endless wave battles on an open field. Another new feature is Open Feint integration allowing you to connect with your feint friends, and compete globally for high scores. The same controls are back by just dragging from the tower icon on the bottom panel to the grid in the place you want it. Also included is a new tower, Thumper, to go along with the five towers from geoDefense. The towers abilities include: blaster, laser, missile, slow down, vortex that sucks up particles from destroyed creeps and adds power to your other towers, and shockwave (thumper). Each tower has seven upgradable levels to maximize damage. 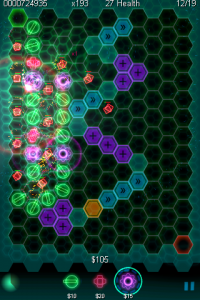 The open field grid itself has quite a few features worth mentioning. As you progress in each level new special hexagons are introduced, and you can’t place a tower on any special hex. The first type is just a solid piece that fills in the open field that you use to assist you in building mazes. Then there are orange hexes that creeps can move across, but you can’t place a tower. Also included are health hexes (purple +) that restore creeps’ health, and speed hexes (blue double arrow) that increases their movement as they pass over.

geoDefense Swarm is a stunning visual masterpiece. This truly is one of the best looking games in the App Store by maintaining the style of the first, but having so much more action in open field. The overall design of the game is perfectly implemented, the interface is beautiful, and everything runs so smoothly. 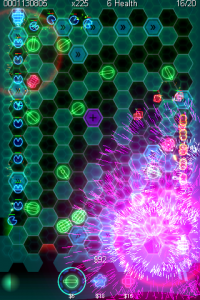 When the creeps are destroyed there is an explosion of color from each and every one. If a creep makes it to your base there is an enormous explosion of red particles across the entire screen, and the play area actually jiggles. The gameplay is the best selling point of geoDefnese Swarm. Open field tower defense is the best way to play TD requiring so much more strategy on your part, and so many different ways to beat a level. If you thought geoDefense was hard, Swarm is even tougher. This may be the most challenging game in the App Store, and is easily the most challenging tower defense. geoDefense, and now geoDefense Swarm have created an actual action packed tower defense requiring constant attention. In most TDs you set up some towers, and then leave it alone for a bit as it plays itself out, doing a few upgrades here and there. In geoDefense Swarm it’s hectic from the first wave to the last with no time for a breather. You’re either placing new towers or upgrading your towers like a maniac trying to reduce down time of towers as creeps waltz past them. 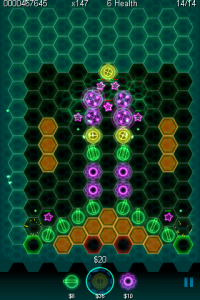 Each level provides a different strategy with varying special hexagons requiring you to alter your maze accordingly. The 10 easy levels are quite fun, and you should be able to beat all of them, but then once you reach medium you may never beat another level as the challenge really amps up. If you beat any of these levels it will feel like a monumental accomplishment. If you like challenges you will play this game over and over again just trying to beat one level, and then multiply that by at least 20 maybe 30. If that wasn’t enough swarm has online high scores so if trying to beat the level even once wasn’t enough you can now go for a high score. 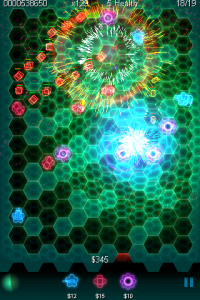 With such a stylized game, the sounds are a disappointment. There is no background music, and you are left with the firing sounds from the various towers, and the light exploding of each creep. You can play your own music, but it’s not the same atmosphere. This game is super tough, and if you don’t like challenges this game will only be frustrating with absolutely no fun. You may play a level a few times, and think that it’s absolutely impossible and just give up, rather than continue to work at it. The more you play the more if feels like trial and error rather than strategy and removing the pleasant thought that skill is required. You will get used to it though, so my best suggestion is to keep at it.

geoDefense Swarm provides open field tower defense, geoDefense style, and that is reason enough to check it out. The visuals are amazing, and the gameplay provides the most difficult tower defense for the iPhone. The challenge will provide great intrinsic reward if you beat the medium or hard levels, and the addition of online high scores adds even more reason to keep playing. geoDefense is one of the best tower defense games, and Swarm is even better, maybe the best in the App Store. Be warned that this game is extremely tough, and frustration might ensue. For only $0.99 geoDefense Swarm is easily a must buy. [gallery link="file" columns="4"]