You are using an outdated browser. Please upgrade your browser to improve your experience.
by Staff Writer
September 11, 2009 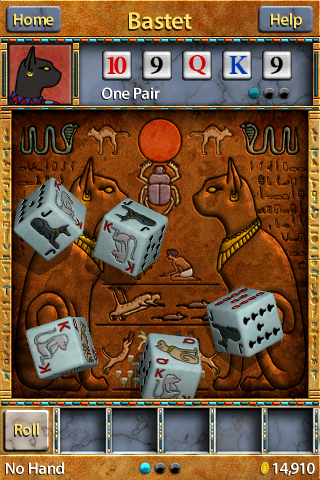 From the creators of the ground breaking MotionX Poker comes MotionX Poker Quest. The Quest makes all the difference by providing a true gaming experience. The brilliant fullpower motionx technology of shaking the iPhone to roll the dice is retained. 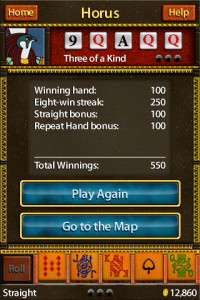 The basic gameplay is poker dice where you roll five dice to get the best poker hand. Now there is an Egyptian theme, and you compete against the Gods. Travel across Egypt collecting coins for winning hands, and pick up trophies and new dice sets along the way. In poker quest you have five dice, with three rolls, and try to make your best hand. You can play with dice Nine to Ace or the regular one to six. Winning hands range from a simple pair to a full house, and even five of a kind. 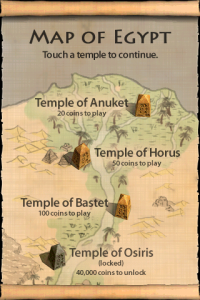 The main feature of MotionX Poker Quest is the ability to feel like you’re actually rolling dice. Unlike so many other dice games, MotionX puts the dice in your hand, and you roll as hard and for as long as you want, rather than just a random number generator. Also after many requests of the original MotionX, Poker Quest includes a roll button in the bottom left if you get tired of shaking. Another great feature is an Egyptian theme intertwined into the classic Poker Dice game of the original. Now you play across Egypt in twelve temples with a unique god for each one. You get to play against Horus, Osiris, and Anubis trying to beat their hands. Also included are 50 unique sets of dice to unlock along your way. Also there are 20 Egyptian treasures to collect from single hand achievements to deluxe ones like reaching a certain bank roll. 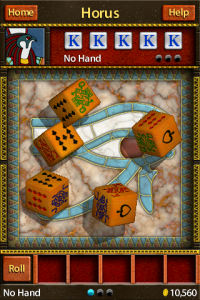 The best aspect of the game is the authentic dice rolling. No other game is even in it's realm, and it adds so much more to the game when you feel like you’re in control. The gameplay itself is fun as well providing a dice twist on the typical poker game. It’s so easy, and so much fun to shake your iPhone, and go for your best hand. The gods provide quite a challenge, and each new temple provides higher entry stake, but also higher reward. It provides the essence of poker, but so much quicker and so much more fun by rolling dice. Another great aspect is the amount of time you will spend with this title. It’s so simple to just keep rolling, and to keep trying to beat the gods. There are twelve temples to reach, each unlocked once you reach a certain bankroll, and you’ll want to unlock each new one with progressive higher stakes, and consequent bigger wins. 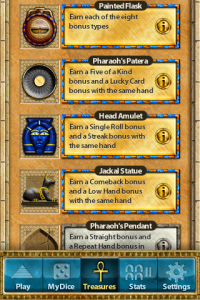 Then there are the 20 treasures to collect that are so unique providing a sense of accomplishment when achieved. Next are the 50 sets of dice which are unlocked by rolling any five of a kind. It always adds flair as you roll with a brand new set of beautiful dice. The game is just so addictive, and so easy to play for any spare minutes in your day. A save system is included that brings you back exactly where you left off like in the middle of roll 2. Detailed stats are included showing your total time played, winning hand percentages, and luckiest dice. The overall polish of this game is superb, and the Egyptian theme is intertwined wonderfully. Every table has a brand new beautiful theme transporting you into the high times of Ancient Egypt. Then there are the dice which have a different design that is so finely detailed from the varying jack-ace logos to the overall color scheme and edges. 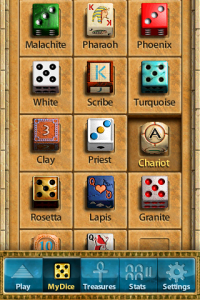 The dice rolling animation is absolutely stunning as it really looks like realistic dice collisions. The dice knock off the walls and each other seamlessly, and you’re able to see them flip from side to side. Then there are the authentic sounds of the dice roll. The dice sound as they should knocking against each other, and then there is the sound as they roll on the table, as though against stone or glass. In all of the menus there is pleasant Egyptian soundtrack, but it is left out while rolling.

What’s there to say, I believe I love every aspect of this game. One suggestion to make this game out of this world would be to add wifi or Bluetooth multiplayer. It would be simply amazing to play poker dice live against your friends.

MotionX Poker Quest builds upon the original to make the best card based game in the App Store, and one of the best to play over and over. Once you play your first hand you will officially be hooked rolling dice on your iPhone. Rather than just a dice rolling app, this is an actual game as you play poker against the AI. The game is beautifully designed, and the dice rolling mechanic and animations are the closest replication ever to actually rolling physical dice. The gameplay is extremely fun, and no other game exemplifies perfect pick up and play, and staying power on your idevice. It's only $2.99 and worth so much more. MotionX Poker Quest is a must buy, so dive into Egypt, and beat the gods. [gallery link="file" columns="4"]