You are using an outdated browser. Please upgrade your browser to improve your experience.
by Nic Elder
October 22, 2009 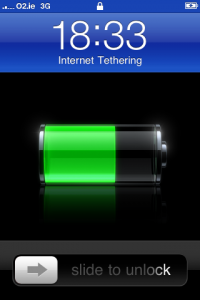 Big news earlier this week was how to restore the internet tethering hack in firmware 3.1. While AT&T refuses to budge on giving users the ability to use the 3G connection from their iPhone on their computers, developers have stepped in to empower the feature promised way back in March at the 3.0 preview event. Unfortunately, the current hack is leaving many users having to choose between tethering or visual voicemail. If you have had trouble with Visual Voicemail after installing the MobileConfig file from http://help.benm.at to enable tethering, then this is for you. I recently installed the MobileConfig file to enable tethering on my phone.  After the installation I noticed that I was no longer receiving visual voicemails from AT&T. My first thought was that I just needed to reset my network settings, so I tried, but had no success.  I still had unheard voicemails that were not being brought to the phone.  After spending 3 hours trying to figure out what was wrong, I decided to remove the profile I installed from benm.at.  Immediately upon removing the profile all of my VVM's (Visual Voicemails) popped into the phone. After spending another 3 hours reinstalling the profile in different sequences along with resetting my networks settings 100's of times, I decided the profile was no good.  It was obviously causing the problem. I decided to examine the profile and find out what was wrong.  BenM.at apparently has set the main data apn (wap.cingular) as the type that would imply it can also handle visual voicemails.  Though the visual voicemail apn is in the profile, it is being ignored since the first apn says it can handle them. I've modified the MobileConfig file correctly typing the data apn so that it won't interfere with the VVM apn.  Using this new profile, I can now enable internet tethering and still get my visual voicemails.  I've tested this profile on several phones and it has passed on all test units.  Ah, tethering and VVM, now that is the way it meant to be.

Get The Updated MobileConfig File

You can download the corrected MobileConfig and install it by clicking the link below from mobile Safari on your iPhone. Remember to REMOVE THE BenM.at PROFILE FIRST! (Settings -> General -> Profiles). Click Here From Safari on Your iPhone Please comment below on your experience with the new profile!