You are using an outdated browser. Please upgrade your browser to improve your experience.
by Hayden Wreyford
October 30, 2009 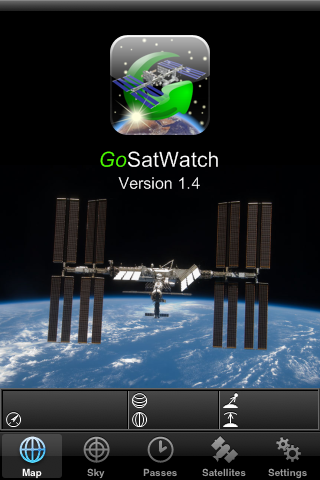 I spent the summer of 1999 in Daytona Beach, Florida. One night, I had the immense pleasure of watching a night launch of the space shuttle Columbia as it lifted off from Cape Canaveral about 80 miles away. It was one of the most amazing things I've ever seen. I confess...I'm a space junkie, and the idea that there are thousands of satellites like the space shuttle zooming hundreds of miles overhead at 18,000+ miles per hour just plain fascinates me. So when I discovered GoSatWatch on the App Store, I almost collapsed from sheer nerd-joy. Unfortunately, you won't find GoSatWatch on any of the Top 25 Lists, but I think it is by far one of the most amazing apps on the App Store. GoSatWatch, by GoSoftWorks (the makers of GoSkyWatch), is a reference app that tells the user the position, speed, height, distance, etc for hundreds of satellites and vehicles orbiting the earth. How does it work? Well, in theory, satellites move at a constant rate just like the earth and the moon. Given any satellite and a point on earth, it is possible to predict when and where that satellite will be and whether or not it will be at the proper angle to reflect the sun's light onto the given location on earth. Quite often the reflections from satellites shine brighter than stars. So if you have something to crunch all this information for you, it is possible to know the exact time, position, duration and brightness of these satellite "flares" and that is where GoSatWatch comes in. And if that sounds impressive, just wait until you see the app. 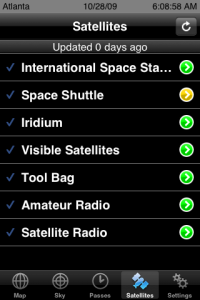 The user interface is crisp and clean and uses icons and graphics to present information rather than being overly text based. GoSatWatch can look a bit intimidating at first glance, but the information is intuitive and the average user should have no problem figuring out what means what after using the app a few times. GoSatWatch makes satellite selection easy by grouping satellites into generalized types. If you only want to see communication satellites, you would simply select "irridium," for example. Based on the type of satellites you select, GoSatWatch will show information for only those types of satellites. As a rule, selecting fewer satellites will avoid clutter on the Map view and will ensure the app runs more smoothly on the 1st Gen iPhone and the iPhone 3G. I've found that GoSatWatch runs very soothly on my 3GS, even with every satellite selected. When I upgraded from my 1st Gen iPhone to a 3GS this summer, GoSatWatch was one of the apps that I noticed a drastic improvement in with regard to performance and overall smoothness. That is something to keep in mind in case you don't have a 3GS, but it shouldn't be a deal breaker. After all, you can continue enjoying this app long after you've traded up to an iPhone 3GS or beyond. 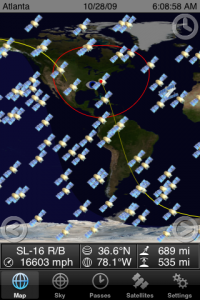 The Map view displays the previously mentioned satellite groups in real time. Yeah. You can actually see the satellites moving as you look at the Map view. Tapping on different satellites will do three things: 1) display a curved yellow line representing the orbital path of the satellite 2) display a red circle indicating what points on earth are currently able to see the satellite and 3) display all relevant information about the satellite such as name, speed, altitude, distance from your location, and latitude/longitude. 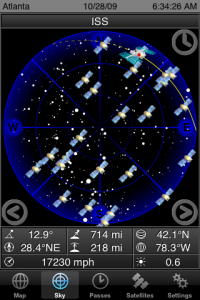 The Sky view displays a large circle which represents a sky chart of the sky over your current location, complete with current, live updated positions of the sun, moon and stars and the previously selected orbiting satellites. Tapping on a satellite in Sky view does two things. First it displays a yellow line representing the overhead orbital path of the selected satellite. Bold portions of the line indicate the segments of the path when the satellite is visible from earth. Second, it displays all relevant information about the satellite, but in greater detail than the map view. Sky view helps you know exactly where to look for the selected satellite, as well as allowing you to track its movement in real time. 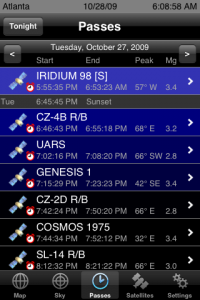 The Passes view displays a list of all the passes for the hours the sun is set in your location. The Passes view is graphically rich considering that it is a list of text. The icon for each passing satellite is displayed along with an alert icon. The alert icon is on by default but may be toggled on and off with just a tap. GoSatWatch will display an alert dialog for every passing satellite that has an alert turned on as long as GoSatWatch remains open (See "The Bad" for more on this). Tapping on any satellite in the list will display a Sky view complete with the overhead orbital path and all other relevant information about the passing satellite. The list of passes is also color coded so that you can tell at a glance whether a pass will occur during the day, evening or night...a nice detail. 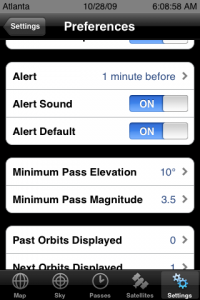 Another great feature of the GoSatWatch is that it is highly customizable. For example, users can save a list of different locations and switch between them with just a few taps. The preferences menu also allows you to adjust settings for minimum pass elevation (in case you have obstructed views of the horizon) and minimum pass magnitude (in case you are in populated areas with greater light pollution). 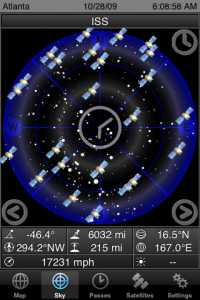 Lastly, GoSatWatch has a truly unique feature that allows users to "rewind" and "fast forward" time. Using this feature works similar to spinning the hands of a clock and all displayed satellites move to their past or predicted orbital positions according to whatever point in time the user winds to. In the Sky view, the sun, moon and even the stars all spin in response to your finger "winding time." So with this feature, it's always easy to see where a satellite was or will be and it helps give the overall impression that this app would cost hundreds of dollars if it were available on a desktop computer. Yet here it is, packed into your iPhone or iPod Touch at a mere $10. 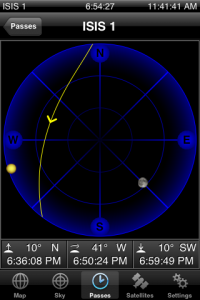 So there is a lot of good about this app. I absolutely love it. That said, I am bewildered by only two things. The first is the fact that GoSatWatch does not allow push notifications. Instead, alarms are available to alert users of passing satellites, but the alerts only work when GoSatWatch is open. What the WHAT?! I am mystified at why the developers have not added push notifications to alert users of passing satellites. It's so obvious that this app would benefit from push notifications that their absence is glaring. The second major omission from the OS 3.1 feature set is the inclusion of the compass in GoSatWatch. It would be so handy to simply have GoSatWatch "point" to where a satellite should appear on the horizon, but alas, users are left to figure out which direction is which on their own. GoSatWatch may tell users that a satellite will appear in the Northwest, but it doesn't tell them where the Northwest is. Users have to exit GoSatWatch, then open the compass (if they have this feature), then go back into GoSatWatch. This is such an obvious feature to include that I am at a loss for why it has not been included, especially when GoSatWatch's sister application, GoSkyWatch prominently features the inclusion of the compass feature for finding sky objects. The upside to these two exclusions is that all it takes to fix them is for the developers to shout "Eureka!" and provide an update. 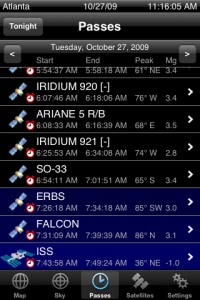 A lesser feature that would be handy is the ability to email friends with pass information tailored to their location so that they could do the whole Feivel the mouse thing and watch celestial objects with you from a different location. Call me sentimental. Finally, this isn't really a bad thing, but it is worth knowing that GoSatWatch does require an occasional data connection to download pass data. If you are using GoSatWatch on an iPod Touch, just make sure your pass info is up to date before heading out to watch satellites. If pass data is out of date, GoSatWatch will alert you when you start the app. Clever, convenient and easy.

GoSatWatch is an amazing application. Period. It's one of my favorite apps ever, and it makes for one heck of a "wow" factor at gatherings and outings. But I guess the real question is why you should care. You may say, "Hayden, I mean, isn't this an app for nerds like you?" I reply, "Yes and no, friend." If you are intrigued by space and satellites, then you probably already stopped reading this review and GoSatWatch is nearly done installing on your device. But for the rest of you out there, consider this. Guys, if you want to impress a hot date, arm yourselves with GoSatWatch and plan a picnic under the stars and watch as the romance points rack up. She'll be amazed as satellite after satellite appears right where you said it would and she'll wonder if you control the universe. (You can thank me later.) Parents, this app could make for one of the coolest camping trips or nighttime outings ever. It gives a great opportunity to capture kids' imaginations and teach them about science and space. Teachers, you get the point too. The best thing is, as I said before, this app would likely cost hundreds of dollars if it were available in a desktop version. So it impresses me to no end that such a high quality app is available in such a perfectly portable format for less than the cost of buying an album on iTunes. For me, it's a must have, and I owned it long before I started writing for AppAdvice. And while you're at it, check out GoSkyWatch too. It's basically a planetarium for your iPhone. Check them out and let us know what you think! 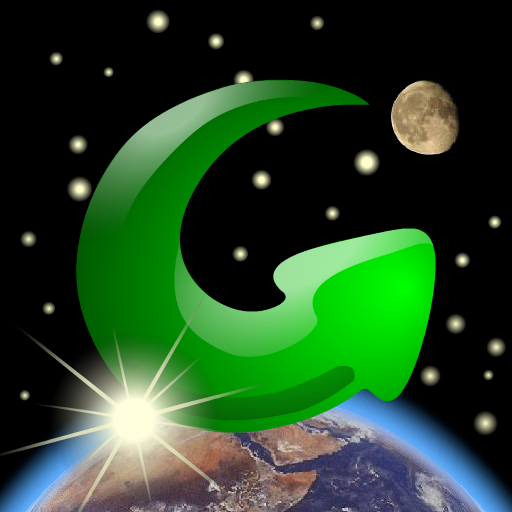 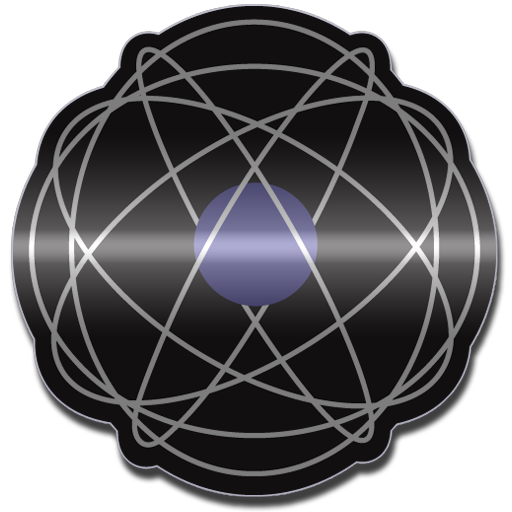