You are using an outdated browser. Please upgrade your browser to improve your experience.
by Staff Writer
October 8, 2009 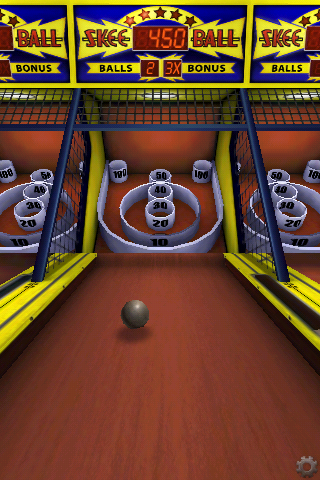 Skee-Ball brings the classic game of the same name to the iPhone. Flick your finger on screen to toss the balls into one of the holes worth varying point values. Earn tickets for the points you score, and redeem them for numerous virtual prizes. This is the exact classic boardwalk game of skee-ball. With five holes in the center increasing in points from 10-50 as you move higher, and two holes in the top corners worth 100. You try to score as many points as possible with 9 balls. 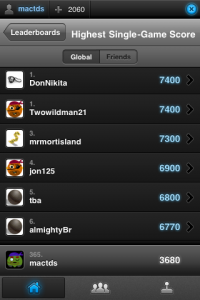 There are two control methods. Either flick the screen to roll the ball, or hold your thumb on the screen, and use a bowling motion. While the ball is in the air you can tilt the iPhone to add spin. The inclusion of multipliers adds to the game nicely, and are achieved by sinking a ball in a highlighted hole, or scoring a certain number of points. This is another Freeverse title to incorporate ngmoco’s Plus+ Network. It keeps track of your highest score, total tickets earned, and achievements. The achievements include skill based ones like getting a certain score, or sinking all 50’s, as well as discovery based ones that you earn by getting prizes. There over 80 prizes to collect that are available to be redeemed at random intervals. Not all 80 are available to buy at once, only eight at a time. The prizes include newly designed balls you can use in game, Chinese fingertrap, fake moustache, and a flat screen TV. 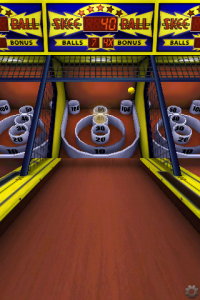 The physics engine is the best aspect of Skee-Ball. The ball rolling seems completely authentic from the ball bouncing into or off of the various cups. The game is relatively accurate in picking up the speed of your flick of the ball. The ball rolling animation is nice to witness, and so is the burst of sparks when you land in a bonus cup. The design of the skee-ball ramp is exceptional, and is a great virtual representation of the game we all remember. Everything just seems to be a realistic representation including the sounds. The ball rolling sound effect is spot on, as is the varying dings depending on the cup you land in. There is also a nice arcade midway soundtrack when you finish a game. Another great aspect is the inclusion of Plus+, which is growing nicely. This provides the chance to compete for earning the most tickets or getting the highest score. The achievements are great as well, and varied enough to appeal to all players. It’s nice to have something to shoot for other than highest score. 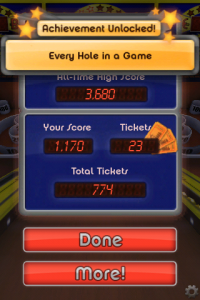 The game gets repetitive pretty quickly as it’s the same exact skee-ball layout every single time. Going for a high score, earning tickets to redeem virtual itmes, or getting achievements can only add so much. Roll nine balls at seven different cups, and repeat, that’s it. With that said it can become addicting mindless fun. For the most part though, with so many great apps, how long can you spend your time playing virtual skee-ball?

Freeverse has done a great job in bringing the real life Skee-Ball experience to the iPhone. The visuals, sounds, and physics makes you feel like you’re actually playing the board walk classic. Having Plus+ for high scores, tickets, and achievements is a great feature. It doesn’t provide the variability of Ramp Champ, but does provide an outstanding Physics engine. Now if only Ramp Champ’s gameplay could be combined with Skee-Ball’s physics engine, that would be one of the best apps. The game is basic, and repetitive, but it's so simple to continue the mindless fun. For $0.99 this game is a should buy, but too repetitive for a higher rating.