You are using an outdated browser. Please upgrade your browser to improve your experience.
by Staff Writer
November 20, 2009 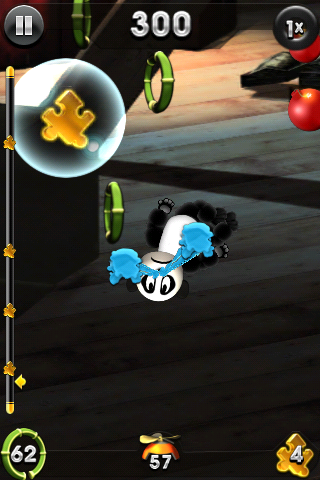 AirBear is a brand new game from Origin8, the developers behind MonsterKill and Sentinel 1&2. The goal of the game is to propel a stuffed Panda bear as highin the air as you can, plus there's a mode to go as low as you can. To go upwards you draw sticky trampolines on screen for the Panda to bounce off. As you move upwards you need to collect bamboo rings, each worth one sticky trampoline. Also there's a mode to go downwards, where the Panda falls, and you can add a propeller hat, and flick upwards to provide wind. How high or low can you go? 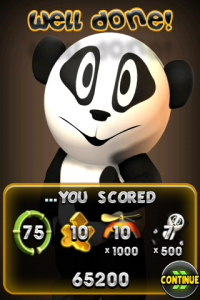 AirBear has two gameplay modes. The main feature of the game is homeward bound which is more like a adventure mode. You bounce up five different areas including the basement, the toy room, up to the attic, and even up a tree. As you progress your goal is collect jigsaw pieces, with 60 overall to collect to assemble a panda puzzle. Each area also includes a down mode where you start from the top where you bounced up to, and travel all the way back down. There are 10 different levels to play with each one unlocked bycollecting a certain number of puzzle pieces. Endless Bound mode is the endless version of homeward bound. You can either try to bounce up a skyscraper as high as as you can, or drop down a well as low as you can. Three dificulty levels are included for each mode. Open Feints online high scores and achievements are included for all gameplay modes. As you progress you will come across bombs that if you touch, it will blow apart your panda, appendage by appendage with stuffing splattering the screen. If you lose all of your appendages, it's game over, but you can reattach them for every 15 bamboo rings you collect. 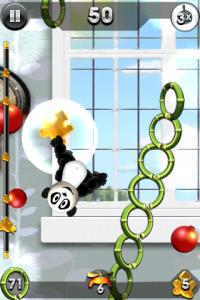 The game is easy and straightforward to control. You draw a line on screen to make a sticky trampoline, but it can only stretch so far or panda will break through. You tap the panda's head to add the propeller hat, and adjust the flight of the panda by tilting. Throughout the game, the panda's body flies around, but really the head is all you control, so the head has to land on the trampoline, the body will just go right through.

AirBear has a lot going for it. First off the game has gameplay we've seen before, but adds to it, and twists it. First off there is an actual adventure mode that lets you bounce up from the basement, to the hallway, through the toy room, into the attic, and finally up a tree. As you're progressing you need to collect the puzzle pieces to unlock the next area, plus the object is to complete the puzzle and unlock a special bonus. Actually playing the game is easy and fun. Just draw the sticky trampoline below the Panda, and bounce upward. Be sure to collect the bamboo rings or you will run out of sticky trampolines, and lose. This is the most fun I've had in any of these types of games, because it requires constant attention as you draw trampolines to bounce upward. 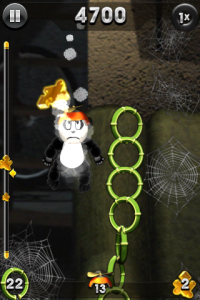 Another great addition is to not only go as high as you can, but also as low as you can, which is rarely seen. Rather than bounding upwards constantly, instead you let gravity take over, and control the dropping Panda. As you're dropping you just tap the Panda's head to add the propeller hat and then drag upwards to add wind to ease your descent to collect puzzle pieces and bamboo rings. The game has an outstanding design, which Origin8 is becoming known for. The backgrounds are all beautifully designed, and you will feel like you're in the toy room or the attic. The stuffed panda is a great main character that is so cute, and has varying expressions from a frown when there's no multiplier, a smile when you collect rings or pieces, and even shock as the Panda is blasted. The sticky trampolines also look great, and are really enhanced to stick out. When the Panda is blasted, white and black stuffing speckles the screen. The soundtrack included is upbeat, and playful. The best aspect of the music is that it's a very long and detailed song, so it doesn't feel repetitive. 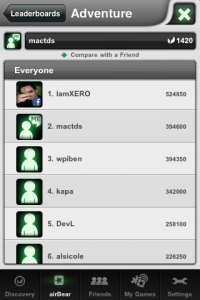 Open feint high scores,and achievements are included to help with replayability. Online high scores are available for adventure mode, as well as endless up, and endless down. Achievements are included for unlocking the different areas, as well as completing the puzzle. The minor things are also great with AirBear. The save system allows you to pick up in mid bounce in any game mode. The controls worked perfectly as you would expect from Origin8. They use the iPhone interface wonderfully, and it's seen again with drawing the sticky trampolines. Also drag upwards to draw wind, tilt to control the Panda, and everything else is tapping.

The upward aspect of the game is similar to Scarecrow. Instead of tapping to blast the Panda upwards, you draw sticky trampolines. The panda does degrade like the scarecrow, and it requires you to be active rather than the character always bouncing. Also the game doesn't seem as fast or as hectic as other similar games. 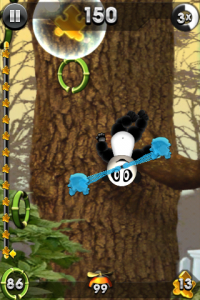 It's slower moving, and not as difficult. The bamboo pieces are easy enough to pick up so that you can always get one if you run out of sticky trampolines, and they also replenish blasted off limbs. As all games in this genre, the game goes by quickly, and in this case it doesn't take long to collect all of the puzzle pieces, and play the entire game. As short as the game is, about an hour gameplay, it's way way longer than Doodle Jump, Scarecrow, Spring Fling, or Papi Jump. Playing up or down, with seven different areas to play through gives this game legs that the others don't even come close to.

AirBear jumps above the competition, and is the best bouncing upwards game in the App Store. The game has an outstanding design, and provides multiple gameplay modes and objectives to keep you coming back for more. The control method is unique, and being able to go down as well as up really helps set it apart. The game is not without it's faults, and that's mainly because all of these games are short lived. It's the best of a bunch that is lacking in replayability. It's a should buy for $1.99, and the only bouncing upwards game you need. 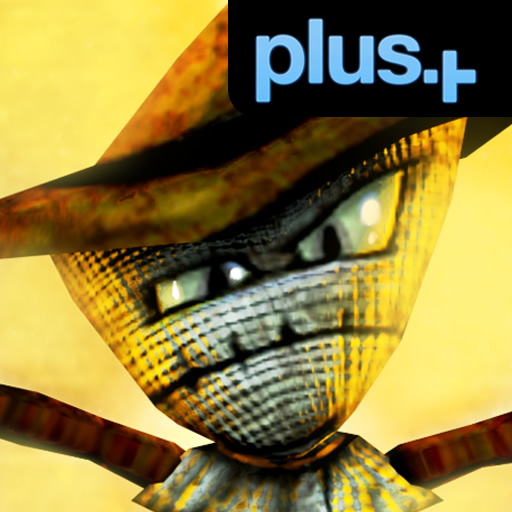 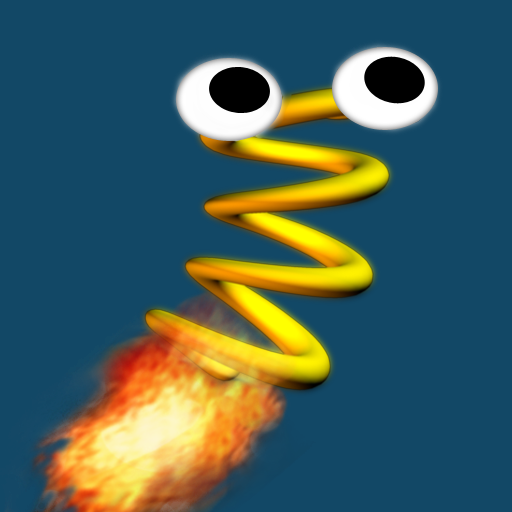 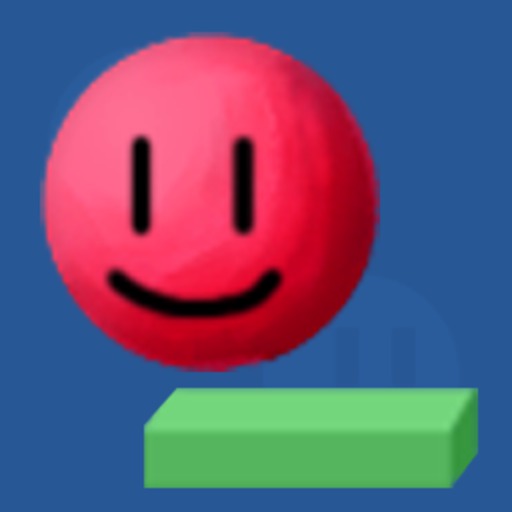