You are using an outdated browser. Please upgrade your browser to improve your experience.
by Alexander Vaughn
December 19, 2009 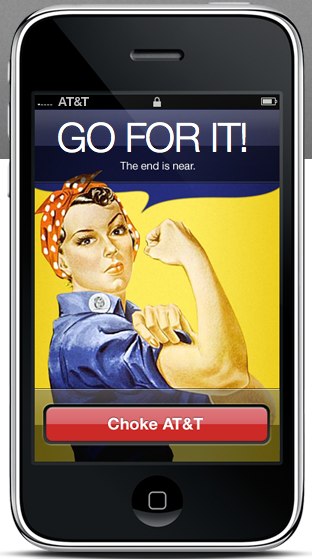 We covered Operation Chokehold at length this week. If you've missed the story, Operation Chokehold was a digital Flash Mob instigated by the famous blogger Dan Lyons, aka the fake Steve Jobs. Fed up with AT&T's practices and attacks against iPhone users he, satirically, wanted to take AT&T down this Friday. To do so, he asked iPhone users all around the US to use data-intensive apps over the course of an hour. The goal was to provoke an overload which would take the network down. The affair got a lot of coverage and media buzz. AT&T responded and Lyons kinda pulled out of it but anyway, everybody is now wondering what happened. Well, what can be seen as the goal of the operation, take AT&T down, failed. Not only the network held up, but no significant impact was measured anywhere. We can go as far as state that in effective terms the network stayed completely unaffected. There were some disparate reports of users being unable to use their data connection, but those seem to be more like classical everyday shortages then consequences of the movement. This is also confirmed today by CNN's Apple guru, Philip Elmer-DeWitt. He contacted John Rust, one of the "Three Musketeers" who managed Operation Chokehold's official website, who claims:

Much likely the participation was low, the Facebook group of the movement for example consisted of a mere 5000 users. Is it a failure then? Nobody actually believes so. As John Rust stated:

we consider the operation to be successful: we proved to AT&T that we believe that 'unlimited' should be 'unlimited,' and that it's not their job to redefine it.

Fake Steve, the instigator of operation Chokehold, himself had already declared victory even before Friday's event. He believes that the buzz provoked by this movement gave a new echo to the problems that AT&T iPhone users face, and this is the true success. Did any of you notice any kind of impact yesterday?