You are using an outdated browser. Please upgrade your browser to improve your experience.
by Alexander Vaughn
December 18, 2009 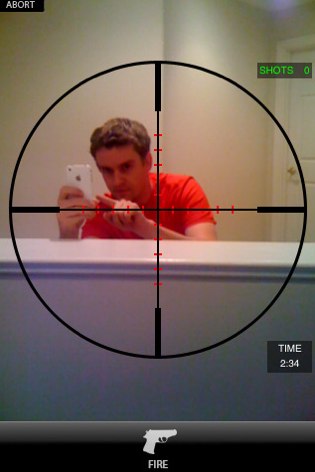 Forget Counter-Strike because playing traditional FPS just officially went out of fashion. Gunman, the first of its kind augmented reality FPS game, just hit the App Store. The idea is simple, you set it up by indicating what's your opponent's t-shirt color (for example) and be ready to fight. The shooting mode will activate and whenever you press fire with the selected color in the middle of your target, you make a hit. It doesn't stop there, you can play with up to 4 other players on Wi-Fi which will really make it fun. Your adversary will have its phone vibrate once you shoot him and you need to shake your iPhone to reload. I would recommend trying to get some unusual colors like red because white makes it too messy. Another fun bit about this game is its Pro-Mode. The developers website features a Hit-list full of known personalities, the idea is for you to hunt them down, shoot them (from your iPhone, of course) and the app will let you tweet it directly. They are also working on integrating the FourSquare location service in it to increase the fun. They are already preparing new game modes and more weapons which should really make it last. Gunman is a lot of fun and even works on the 3G so make sure to check it out.