You are using an outdated browser. Please upgrade your browser to improve your experience.
by Staff Writer
January 19, 2010 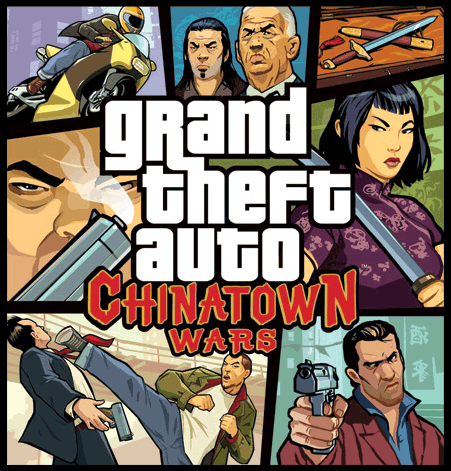 Grand Theft Auto has finally come to the iPhone, and it’s the official version from Rockstar. This is the Chinatown Wars version that is seen on other mobile platforms like the PSP and Nintendo DS. The main storyline and depth seem to be ports, with major differences in the graphics engine and controls. The story takes place in Liberty City, and you play as Huang Lee. The game begins with Huang going to America after his father has died, and attempting to deliver a sword to his Uncle Kenny. As he lands he gets ripped, and left for dead, and now it’s up to you to make it through the horrible city looking for vengeance. 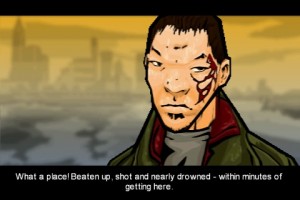 This is a 3D top down version of Grand Theft Auto (gta) which is more of the classic compared to what consoles have been giving recently. The entire game is composed of mini missions to work for the mobile platform. Everything is open world as you would expect to give you access to anything anytime. The controls differ for when you’re in the car or running around. When driving there is gas, brake, and hand brake buttons plus left and right directional buttons or the choice for a control stick. When on foot there are three action buttons with punch/fire, jump kick, and roll/jump. 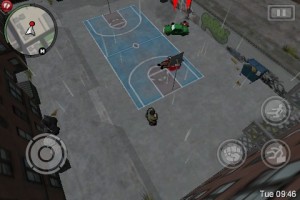 To steal a car you just walk up to it, and press the car button at the bottom of the screen. You can get into any type of vehicle, but some require some on screen gestures to unlock. The game has you playing as a gangster, so you’re not just stealing cars, but shooting people, and there is a ton of swearing. There are tons of customizable settings as well so be sure to check those out if you purchase.

This is the full top down grand theft auto that doesn’t skimp on any offerings. If you want open world gangster role playing look no further. 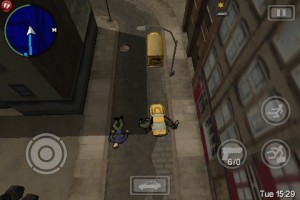 The included storyline is extremely deluxe, and is typical gta fare just with an Asian spin, hence the name. The story develops nicely, and there is character development. A nice bonus feature is that if you tap and hold you can skip dialogue, which is essential when replaying missions. It’s just a great experience you can now have on the go with a device you bring with you all the time. The missions are easy to initiate, and advance the story so there’s always action. Jump into any car, and speed around Liberty City. Then the missions vary from killing rival gang members, drive by shooting, to stealing a certain number of cars, to avoiding the cops. 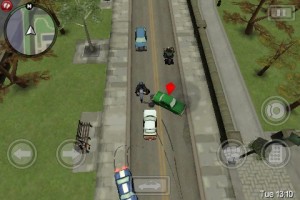 A really nice aspect is that as you’re driving there is a ton of traffic to deal with, and when you cause too much damage, or a cop sees you steal a car they’re right on you. As you go down the streets you see action occurring in the background or you drive pass a car accident or even see a dead body in the street. The visuals are really well done with 3D rendered cityscapes. As you car is damaged it deteriorates appropriately, until it bursts into flames with the entire process nicely detailed and animated. Included are weather effects, and lighting effects that are completely random. 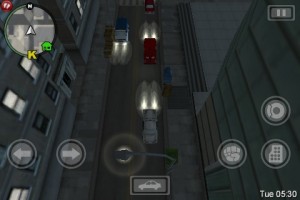 The animations of shooting, and killing are relatively lackluster. There are lines of flashes as you shoot, and then when killed red soaks out from a person. The people are also in 3D whether you’re running around, or see people crossing the street, or cops running up to your car. There are six music stations to listen to with varied songs for each station. They’re all nice to listen to, but do only play when you’re in the car. The sound effects are well done whether it’s shooting, crashing into items, or running over people they all sound accurate. 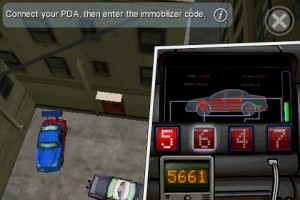 Overall there is tons and tons to do in this game. The amount of time spent will make it worth the $9.99 price tag. Not only is there a lot of content, but also you’ll want to get through the whole game for numerous reasons. Whether it's sheer enjoyment, making it through the story, and of course playing more advanced missions with more challenges and different vehicles.

There are only a few minor concerns. The biggest is probably the controls which don’t allow for as precise driving control as you would like. They’re manageable, but nowhere near perfect. The steering assist is very helpful though especially to make it through traffic. 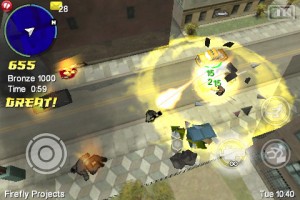 Another concern is that the missions don’t have much depth, but that is because it’s made for the mobile platform. The save system auto saves after a mission, but no in mission saving. You would think Rockstar could have had the game save in mission, and make the missions longer. Also the missions become relatively repetitive, but again that is expected of the mobile version compared to a console version. The shooting/attacking mechanic isn’t the best either. There is no way to lock on, so you just mash the shoot/punch/jump kick buttons as many times as you can, and the game will lock on intermittently. The price tag of $9.99 may seem excessive at first glance. That is until you realize this is very similar to the DS and PSP versions which sell at $20 and $30 respectively. You’re getting quite a bargain in comparison, and just because of the current App Store market.

As you would expect Rockstar’s Grand Theft Auto is the best open world gangster game in the App Store, and all previous attempts to copy pale in comparison. This is the full gta, and not a watered down version. The production values are simply outstanding, and if you like gta this is an easy pick-up. For a wider audience, just make sure you are aware of the included content, as that’s one of the selling points of the game. Thankfully the game isn’t trying to sell a game based on name alone, and is charging a premium price for a premium constructed game. It’s not perfect, but a should buy for $9.99, and a higher recommendation if you’re a grand theft auto fan.