You are using an outdated browser. Please upgrade your browser to improve your experience.
by Staff Writer
April 8, 2010 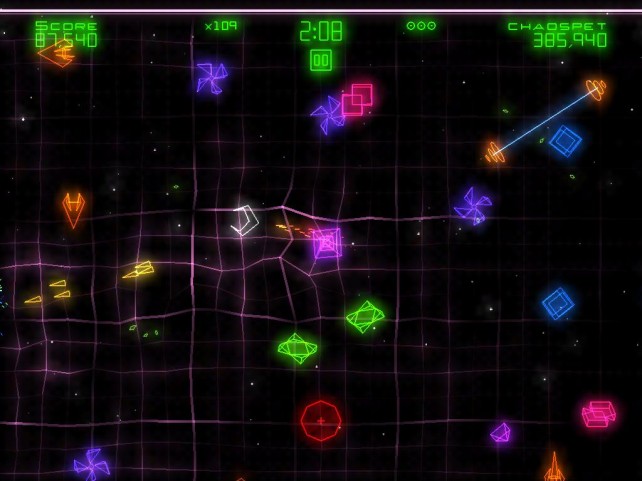 Geometry Wars has seen great success on all kinds of platforms, and has seen many clones in the App Store. Well now the official version from Activision is available as a native iPad game. It features dual stick controls where you blast through waves of varying geometric shapes in a 2D space world. 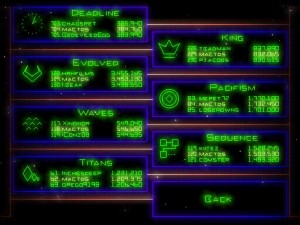 The game features the six gameplay modes you've seen before with deadline, king, pacifism, evolved, waves, and sequence. In case you don't know deadline is a three minute game trying to score as much as possible. King mode requires you to be in circles to be able to fire, and evolved mode has the enemies increase in difficulty steadily. Waves give you vertical and horizontal crossing enemies while sequence presents 16 short challenges of huge masses of enemies. There is one iPad specific mode called titan that gives you giant enemies that you have to blast into their smaller parts until all are destroyed. Online high scores are included for each of the seven gameplay modes, and there are local achievements. 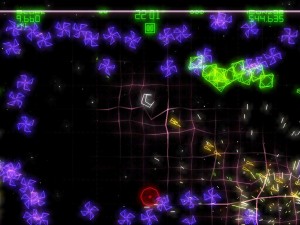 If you've ever heard of Geometry Wars, then you know that it's a good thing that it's on the iPad. It presents hectic fast paced fun with amazing visual candy. From the first launch of the app in the first minute of play you will be hooked to the non-stop action that is Geometry Wars. The enemies have a very intelligent AI, and each one has different tactics to attack you. Some come directly at you while others shy away from the bullets until you have your back turned. Then if you're not mowing down enemies at a high enough clip you'll be simply overwhelmed. Little green pick-ups are included that build your multiplier, and are essential to go out of your way to pick-up if you want a really good score. 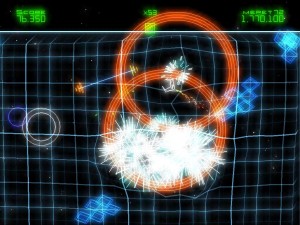 Having seven different gameplay modes should keep you entertained for awhile, and help give you a different game depending on the mood you're in. Each mode is quite different from each other, and provide different challenges to keep your thumbs going. Evolution, Sequence, and Titan are enjoyable when you have more time to kill, while King, Deadline, and Waves are for short bursts though playing all of them in unison is amazing. The game is wonderfully designed to totally engross you in the large iPad screen. As the geometric shapes come at you, and you blast them into particles it's right there in your face at your finger tips making Geometry Wars touch like no other version you've ever played. It's amazing seeing the background vibrate and morph on killing as well as all of your bullets and destroyed enemy particles flying at once. 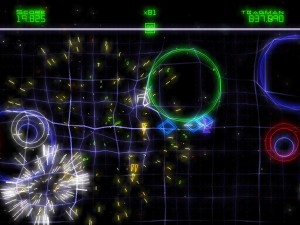 The game could go simple with the soundtrack, but instead it's a full on deluxe mix with a few variations. The music changes based on the mode, and the overarching theme fits perfectly presenting a fast paced techno beat to further the immersion. The inclusion of online high score tables for each of the gameplay modes is a great addition to keep you in the Geometry Wars universe. The achievements are local, and there are only ten, though still nice to have. 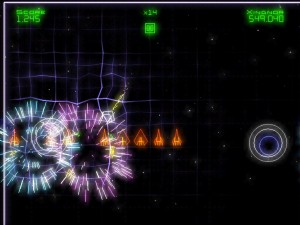 The dual stick controls are good as they appear where ever you place your thumbs on the screen. Once you start playing you never consider the controls again, though they don't offer the same tight precision as Minigore HD. It seems that you can never point and shoot to fire directly at an enemy of your choice like you can in Minigore. Activision really cared about making a good game for the iPad, and it shows. They could have done a lackadaisical port, and would have sold on name alone, but finally a big developer stepped up, and designed a good touch based game. 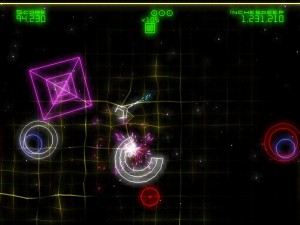 The game is well made, but it's not perfect. The controls are well implemented, and dual sticks feel natural on the iPad contrary to some other reports, but these don't seem to be as precise as they could be. Occasionally you will lose a life due to the controls, and that shouldn't happen. The game though having seven gamplay modes still doesn't vary as much as you would think, or like. Once you've played each game mode you will never see anything new again. Some gameplay modes have random generation of enemies, but sadly others give you the same like Sequence, Waves, and Titan. Overall once you've had a great time playing for an hour, you get pretty tired of it, and may never launch it again. 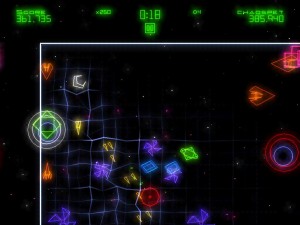 The game doesn't save your progress, so if you exit in the middle of any of the modes for whatever reason you have to start over the next time you're in. No matter what the platform, a game should save progress so we don't have to feel chained to the game until completion. There is occasional freezing and crashing issues that a simple reboot fixes, but still obviosuly bugs in the software. The high scores are almost perfect, but in game live leaderboards aren't included which could have really helped the replay factor.

Geometry Wars: Touch for iPad does the game name proud with the touch interface. The game is packed with fun that is varied over all the included game modes providing unique challenges. Activison has done a great job in bringing the franchise to the iPad providing amazing production values, and very good touch based controls. The game lacks a save system, the controls aren't as pinpoint as they could be, and the variation isn't as great as it should be to truly be an exceptional game. Geometry Wars™: Touch for iPad is a should buy for $9.99, but there are better options available for the iPad, and a shooter in particular. 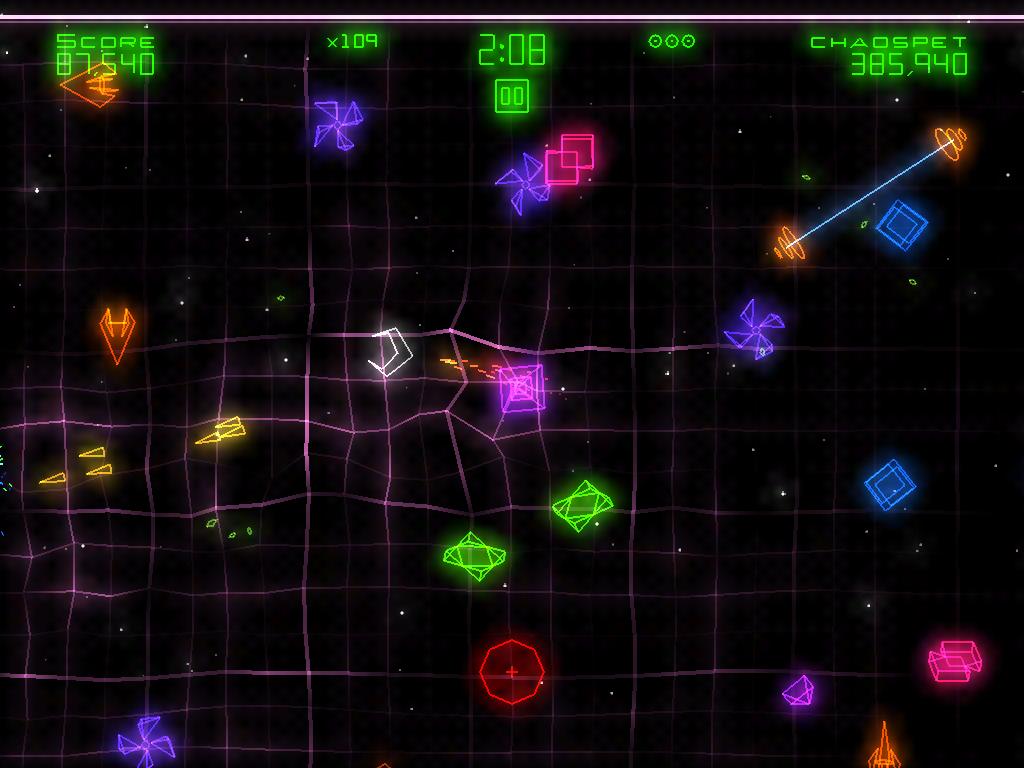 Review: Geometry Wars™: Touch for iPad
Nothing found :(
Try something else